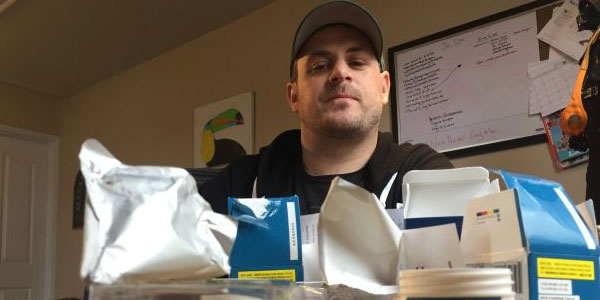 For every gram of cannabis sold there can be as much as 70 grams of packaging waste, according to some of Canada’s first cannabis customers.

The amount of plastic, cardboard, foil and wrap that’s being used to package and market cannabis seems excessive to many.

“It’s really shameful,” said Remi Robichaud of Moncton. “Being a coastal province, they should do something about the amount of plastic that goes into our ocean.”

Robichaud says a friend of his used a food scale to compare the weight of a gram of cannabis purchased at Cannabis NB to the 70 grams worth of plastic, foil, and packaging that it came in.

“Seeing the amount of plastic being used for such small quantities, it’s really shameful.”

In Nova Scotia, the issue is similar, according to Greg Mac who purchased his cannabis from an NSLC store.

“I think the packaging is pretty excessive,” said Mac.

“Look at what comes with one gram of weed — you’ve got a cardboard box that comes in a bottle. That bottle is sealed with more plastic. And you open it up and see how much weed actually comes in the bottle and you think “Wow, there’s a lot that’s going on there.”

Mac purchased four grams of cannabis then shared a photo online of the excess plastic bottles, wrappings and cardboard that was used to package it.

That photo was shared hundreds of times resulting in many voicing their displeasure with what they consider to be excessive plastic packaging.

“I’ve been buying from medical dispensaries for two years now,” said Mac. “And all I ever get is Ziploc bags of different variations. And that’s always been pretty good for me.”

On its website, Health Canada mandates that cannabis “be packaged in an immediate container that is tamper-evident, child-resistant, prevents contamination and keeps cannabis dry.”

It also states that “regulations would require that the immediate container be opaque or translucent. Products could have both an inner and outer package, but every package would need to be labelled in accordance with the proposed requirements.”

It also states that each order of cannabis include an informational document developed by Health Canada that includes health and safety information.

Robichaud argues cannabis packaging could be made of glass, instead of plastic, and reused, similar to how craft beer producers use “growlers, “or glass jugs that can be refilled with beer.

Mac agrees and says being able to bring back enough plastic bottles for a discount of their next purchase would be smart in an age where companies and governments around the world have pledged to reduce their own plastic waste and even ban the plastic straw.

“It’ll give somebody an incentive and is the smart way to go about it,” said Mac.