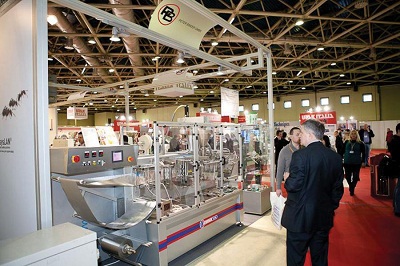 Russia has developed into one of the most lucrative markets for the consumer goods industry. The Russian Federation, the most populous country in Europe with a population of approx. 143 million, is among the most important sales markets for the food, beverage, cosmetics and pharmaceutical industries and their products. The growing middle class and increasing prosperity have resulted in a change of consumer and shopping patterns.

There is an emerging interest in novel, modern, processed and packaged foods and beverages. This development stimulates the Russian packaging market and the demand for innovative machinery and technologies producing materials for packaging solutions in all sectors – from the food industry and the cosmetics and pharmaceuticals sector to the chemical and consumer goods industries.

Despite its growing food industry, Russia is one of the biggest importers of meat, dairy products and fruit. To develop its autonomy in these sectors and to guarantee western product performance as well, there is an increasing focus on food processing machinery, packaging processes and packaging designs. Whether it is hygiene, storage or design, packaging and process technologies play an important role. The suppliers of these machines benefit from this development. Foreign and Russian producers invest in modern and flexible machinery to offer consumer-oriented product performance.

The starting point could not have been more positive for UPAKOVKA/UPAK ITALIA, the leading Russian trade fair for packaging machinery, packaging production and packaging material. From 29 January to 1 February 2013, more than 20,000 trade visitors from Russia and the CIS states received specific and targeted information on innovations in packaging and process technology from more than 300 exhibitors. The companies reported that they had interesting and intensive discussions with existing and new customers.

UPAKOVKA/UPAK ITALIA is held annually alongside interplastica, the International Trade Fair for Plastics and Rubber, at the ZAO Expocentre Exhibition Center in Krasnaya Presnya. Werner M. Dornscheidt, CEO of Messe Düsseldorf GmbH, is pleased with the large number of satisfied customers: “UPAKOVKA/UPAK ITALIA proves again that it is the leading trade fair for packaging and processing in Russia and the CIS region. We are particularly happy about the persistently high number of exhibitors showing machinery and plant in operation at UPAKOVKA/UPAK ITALIA.”

The organisers responsible for the UPAKOVKA/UPAK ITALIA event are Messe Düsseldorf GmbH, its subsidiary Messe Düsseldorf Moscow OOO and Centrexpo. Companies from Germany, Russia and Italy were the strongest groups in the total of more than 300 exhibitors from 22 countries. Russia is the most important market for German plant and machinery manufacturers in Eastern Europe. The German-Russian relations in the mechanical engineering sector have been in existence for decades. German suppliers of foodstuffs and packaging machinery have benefited from their good reputation as manufacturers of high-quality machinery.

For products requiring high-quality engineering, Russian buyers hold the “Made in Germany” brand in high esteem. Ms Vera Fritsche from the Food Processing and Packaging Machinery Association (Fachverband Nahrungsmittel- und Verpackungsmaschinen), a division of VDMA the German Engineering Association (Verband Deutscher Maschinen- und Anlagenbau e.V., VDMA) sees a continued high potential in the Russian market: “Germany is Russia’s main supplier country for food machinery and packaging machinery accounting for a 34% share in total imports. For German manufacturers Russia is the third biggest single sales market for this machinery after the USA and China. Exports achieved a total volume of EUR 446 million over the first ten months of 2012.

German companies support the Russian industry in extension and modernisation projects with their know-how and state-of-the-art technology. The expectations of German exhibitors regarding UPAKOVKA/UPAK ITALIA have been fulfilled. Visitors came with concrete enquiries and business deals were also concluded.”

Dr. Guido Corbella, Managing Director of Centrexpo, also confirms the extremely positive exhibitor feedback: “Exhibitors express an above-average level of satisfaction. This year, Italian companies showed a lot of machines. I am happy that the Russian market recognises this commitment. UPAKOVKA/UPAK ITALIA is the hub for Russian packaging and process engineering activities. Many decision-makers from Russian industries participate in this trade fair. The majority of our companies believe that the Russian market is very promising and use UPAKOVKA/UPAK ITALIA as a platform to establish and expand their business relations.

Russia is among the TOP 10 packaging markets, and exhibitors confirm a high demand. In the coming years, the focus will be increasingly on the converting and packaging printing sectors. I think this is a big development.”

Packaging trends at UPAKOVKA/UPAK ITALIA
In the context of UPAKOVKA/UPAK ITALIA 2013, the SAVE FOOD Initiative of the United Nations Food and Agricultural Organisation (FAO) and Messe Düsseldorf GmbH also received a lot of attention. Lectures on this topic were held in the FUTURE FORUM, an event launched in 2013. In a lecture entitled “Modern engineering as a means to fight food losses”, the VDMA Association provided information on the background of this issue in Russia and the solutions proposed by the processing and packaging industry.

Furthermore, the SAVE FOOD Exhibition had its premiere in Russia. It visualised international food losses and thus further increased the visitors’ awareness for this important issue.The next UPAKOVKA/UPAK ITALIA will be held from 28 January to 31 January 2014 in Moscow – again in parallel with interplastica. The upcoming specialist trade fair will again define primary topics in the processing, converting and packaging printing fields. The new regulations introduced in Russia for product labelling and marking lead to an increased interest in these matters.