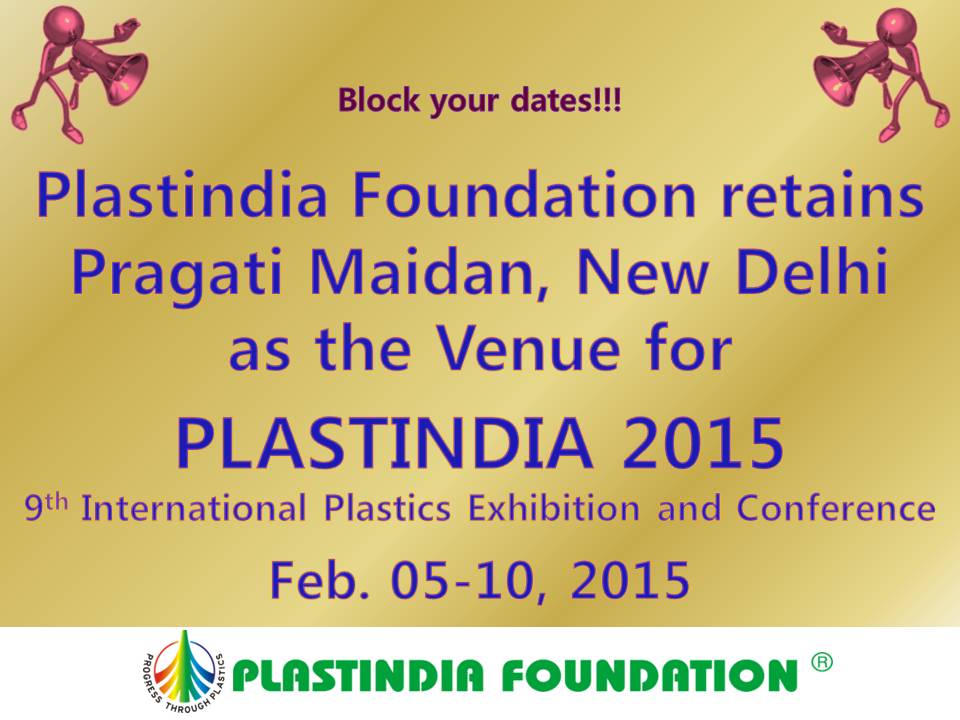 Plastindia Foundation, which has worked ceaselessly over the past 25 years today announced the launch of the 9th Avatar of Plastindia 2015 with the vision of taking the Industry forward on its path as one of the fastest growing sectors in the Industry. The plastics industry was present in full strength at the launch, with industry reflecting optimism that the resilience displayed in the past 25 years by the industry will ensure its success and see it reach new heights and meet and overcome future challenges. Each of them believed that India is one of the fastest growing markets for Plastics in the World.

The ninth edition of Plastindia 2015 to be held from February 5-10, 2015 at Pragati Maidan, New Delhi, is supported by the Ministry of Chemicals and Fertilizers and will be one of the three largest shows in the plastics industry globally, with strong international participation Plastindia 2015, spread over 125,000 sq.meters of area, will have over 2000 exhibitors from over 40 countries and over 150,000 business visitors.

Joining hands with the Plastindia Foundation, the apex body of major associations, organizations and institutions, including Government & semi government organizations associated with plastics are major internationally acclaimed partners such as Messe Dusseldorf, EUROMAP – The European Plastics and Rubber Manufacturers Association, the British Plastics Federation, Adsale Exhibition Services, Messes Pilatus International Co among others. The Foundation’s main objective is to promote the development and growth of the Indian Plastics Industry in India and is dedicated to national progress through plastics.

In his welcome address, Shri Subhash Kadakia, President of the Plastindia Foundation said, “The exciting developments of the recent past, ranging from the Wiintech cluster initiative, to the push for TUF’s implementation and the unprecedented show of strength at K 2013 gives me immense confidence in the future of Indian plastics. The 9th edition of this event will be bigger, better and aspire to achieving much greater ambitions. Exchange in Abundance –Expanding Horizons. This is the biggest business platform for our industry and I invite you to join us in our continued quest towards becoming responsible global leaders in plastics.

Launching the latest edition, Mr. Avinash Joshi, IAS, Joint Secretary-Petrochemicals Division, Department of Chemicals & Petrochemicals, Ministry of Chemical &Fertilizers – Government of India, said that “the Industry has unlimited potential to be a world leader if it continues to believe in itself as it has done so far.” Joshi also stated that “Plastindia 2015 would bring in a lot of opportunity to the various stakeholders as it will be among the biggest in the world,”

Elaborating this view, Shri J.R. Shah, Chairman National Executive Council, Plastindia Foundation, said, “With the main objective of Plastindia Foundation being the promotion, development and growth of the Indian Plastics Industry in India, we have initiated steps to be the driving force for the MSME’s by facilitation, counseling and advising them on the processes and steps to avail of the Technology Upgradation Fund offered by the Government of India.” He continued by stating, “This will be an eye-opener to many and emphasize India’s position as the world’s sourcing hub for plastics finished products.”

The six-day mega event, Plastindia 2015 will bring under one roof major global and Indian Plastics Industry innovators. The exhibition and conference will reveal the cutting edge technological developments, equipments and products. Plastindia 2015 takes further the innovations from the earlier version, in that; it will concurrently host Proplast 2015 and an International Conference to draw the attention of the entire business fraternity. Eminent academicians, consultants, professionals, technocrats, research scientists and industry experts will participate and share their views during various seminars.

The previous exhibitions organized by the Plastindia Foundation, have already established India as a desired destination to the global plastics industry players as well as depicting the eagerness of Indian entrepreneurs to absorb and deliver to the growing market demands. Every exhibition organized by the Plastindia Foundation have bettered the previous one and grown to become a much sought after event, both nationally and internationally.

Key attractions for this exhibition:
24th ASEAN Plastics Forum
Proplast 2015 – finished goods section, This will showcase the forays made by the Indian processed plastics sector. PLASTICON Awards to encourage and recognize innovation and growth in all facets of Indian Plastic Industry and to honor significant contribution made by Indian business enterprises, Institutions, NGOs and individuals who have excelled in their endeavor.Wiintech – Worldwide Intercluster Initiative for New Materials and processes focused on Clean TECHnology – The European Gateway to develop business and technology opportunities.

Opposite sentiments appear for PVC in Italy and SEA

Exacting standards are in sharp focus for AB Systems

Recycling is a “false solution” to plastic pollution