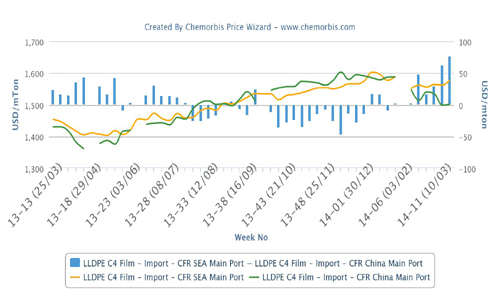 According to ChemOrbis, players report more offers for Chinese origin and re-exported PP cargoes from China in Southeast Asian markets where prices moved higher this week. Discouraging post-holiday demand in China is blamed as the main reason for sellers looking to divert their cargos from China to other countries including India, Vietnam, Indonesia and Myanmar in an attempt to obtain better netbacks.

Many converters in China report not seeing good end product orders for their exports while they are uncertain about the market outlook due to volatile energy markets. New coal based PP capacities, out of which a total of around 4 million tons/year started up last year, exert pressure on the market as well. However, Southeast Asian markets are facing tight PP availability which draws a firm picture for the short term. A trader from Ningbo, China, who managed to conclude deals for re-export Saudi Arabian cargoes to Indonesia, agreed, “So far demand in China is still not encouraging.”

In Indonesia, a woven bag manufacturer reported that Chinese coal based PP was offered into the market. He heard from a trader that they managed to sell 800 tons of this coal based PP raffia because buyers in Indonesia need to meet their requirements for their export orders while local supply is tight. The converter commented, “If the coal based material will have the same quality as the conventional production methods then it may grow its market share in Southeast Asia.” A woven bag converter reported purchasing some re-export Saudi Arabian cargos from a trader as local supplies remain limited in Indonesia.

In Vietnam, a trader confirmed that supplies were limited and he had to refrain from offering because his Saudi Arabian source does not yet have supplies for him after a turnaround. A different trader added, “There are several turnarounds recently which limit the number of offers in the market and support sellers’ higher prices.”

Meanwhile, Southeast Asian buyers started to go to the sidelines considering lower crude oil prices, according to a trader in Myanmar who was offered Saudi Arabian homo PP raffia and injection out of China. “Some traders are asking customers for their bids for re-exported materials,” he said.