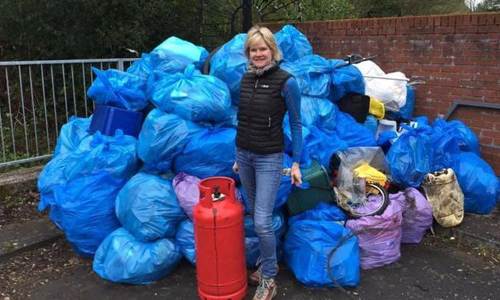 THE proposed plastics factory for Skibbereen looks set to be an election issue in the area in next year’s local elections.

And a local TD has called on the factory’s owners to hold a public meeting in a bid to quell local fears.

At a meeting hosted by SOS (Save Our Skibbereen) in a packed West Cork Hotel ballroom, supporters of the campaign to oppose the factory were asked to help raise an initial €15,000 for a legal challenge. Within just five days, over €12,400 had been collected.

The SOS committee confirmed that they are now moving to seek a judicial review of An Bord Pleanála’s (ABP) recent decision to allow the factory to go ahead.

The meeting heard from many high profile members of the community, including film producer David Puttnam, Stephen Evans Freke from Castlefreke estate, and a note was read out from actor Jeremy Irons, who is currently filming in the US.

All three said they were totally opposed to the building of the factory at Poundlick, and there was a call from Lord Puttnam to highlight the issue in advance of the upcoming local elections in May.

This week, Fianna Fail TD Margaret Murphy O’Mahony issued a statement saying she was opposed to the proposed factory in its current form. Referring to the factory’s parent firm, RTP, she said: ‘RTP must properly engage with the local community, who are now up in arms about this project, and hold a number of public meetings to address their concerns on this matter,’ she said.

‘As a local public representative, I have, in the past, called for new jobs, new businesses and new investment in West Cork. However, this support doesn’t come with a blank cheque. I know that local groups are now actively seeking a judicial review of the Cork County Council and An Bord Pleanála decisions to grant permission. This will be a tall undertaking, but in the meantime, RTP must start to engage better locally,’ she said.

Her party colleague Cllr Joe Carroll has already come out in support of the factory.

There was a lot of criticism during the meeting of the councillors who had voted in January 2016 to rezone the greenbelt area of the town, allowing Daly Plastics Ltd to apply for planning under the new ‘light industry’ zoning.

This category of ‘light industry’ was queried by An Bord Pleanala’s own inspector who ultimately recommended refusal of the planning permission which had been earlier granted by Cork County Council.

Cllr Christopher O’Sullivan addressed the meeting to explain why he had changed his mind, having earlier supporting the factory.

But for several minutes he was heckled from the floor, until meeting chairman Brendan McCarthy urged the audience to ‘give him another minute’ to explain himself.

Pointing out that he was himself an ‘environmentalist’, a member of Birdwatch Ireland and a part-time whale watching guide, Cllr O’Sullivan said: ‘I put my hands up. I got it wrong. If I could go back, I would 100% not support it.’

The meeting heard from legal advisor Harry Sexton that he felt they had a good chance of getting past the first hurdle – at the High Court in February – to apply for an order to quash the ABP decision, and that was what the initial €15,000 would cover.

But Brendan McCarthy refused to be drawn on the cost of an extended legal battle, if a judicial review is granted, saying he didn’t want to put anyone off by going down that road, and the first hurdle was to get the review.

Lord David Puttnam said he spends his ‘day job’ in the House of Lords trying to stop ‘another kind of lunacy – Brexit’ and he reminded the audience of the location elections in May and said it was not ‘AN’ issue – ‘this will be THE issue in May.’

Speaking to The Southern Star, Stephen Evans Freke, who also addressed the meeting, said it was ‘completely irresponsible’ to allow the factory to go ahead and he cited the poor roads network and the traffic congestion in several towns between Skibbereen and Cork city, which the trucks transporting the materials would have to negotiate.

There were many references to a recent fire at a plastics company in France owned by the parent company of Daly Plastics, which took 50 specialist firefighters to contain.

Committee member Brendan McCormack, who is spearheading the fundraising campaign, warned that there was still a lot of apathy about and suggested the campaign should try to enlist celebrities like the O’Donovan brothers to promote the cause.

Members of the audience made several suggestions, including running a ‘plastic-free day’ in Skibbereen; the possibility of buying the land; getting the councillors to overturn their zoning decision; seeking the Council to CPO the land, and calling on the IDA to rethink selling the land to Daly Plastics.

Mr McCormack urged the public to focus first on getting the funding for the judicial review.