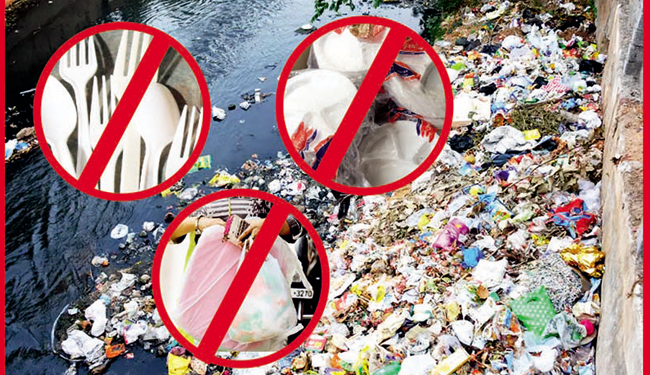 Justifying its decision to ban plastic goods including the one-time-use carry bags, the Maharashtra government today told the Bombay High Court that plastic waste is a serious environmental hazard which affects the health of human beings and animals.

The government, on March 23, imposed a ban on “manufacture, sale, use, distribution and storage” of several plastic goods and materials including polythene bags, plastic plates, cups, spoons and forks, thermocol and PET bottles.

It submitted its reply today to four petitions filed by associations of plastic manufacturers and retailers challenging the ban.

The affidavit filed by the state environment department said the objective was to protect and improve the environment.

“Use of plastic bags, PET bottles and other plastic materials is causing serious environmental hazard and affecting health of human beings and animals. The notification was issued in view of alarming material before the government showing the harming effect of disposal of non-biodegradable material on the environment,” the affidavit said.

The death of a whale near the Mumbai coast recently was due to plastic, it pointed out. “Autopsy report….confirmed presence of plastic waste in its stomach. Plastic waste is also found in the stomach of dead cows,” the affidavit said.

In Maharashtra, nearly 1,200 metric tonnes of plastic waste is generated every day, it said.

“Plastic requires more than 100 years to degrade. Plastic waste is disrupting natural balance of the eco-system, thereby causing harm to flora and fauna,” it said.

A special committee set up by the government on the issue held several meetings with the petitioning associations before issuing the ban notification, it said, adding, “the committee is willing to hold further meetings.”

A division bench of justices A S Oka and Riyaz Chagla suggested that the petitioners approach the panel afresh.

“What we are suggesting is for the petitioners to appear before the committee. If the government is saying they are willing to reconsider the issue then let them hear everyone’s contention. They (government) have the powers to modify the notification,” the court said.

Petitioners’ lawyers Milind Sathe, Janak Dwarkadas and Anil Anturkar said they were ready to approach the committee, but the court should defer implementation of the ban till the committee hears them and takes a decision.

The ban order is arbitrary, was passed without following the principles of natural justice, and also violates the fundamental right to carry on a trade or business, the petitions said.

Dwarkadas contended that such a blanket and “overnight ban” was affecting the livelihood of thousands of persons.

The court will continue hearing the petitions tomorrow.