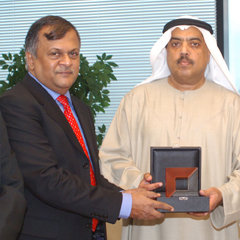 For the plastics and rubber industries in the MENA region, Russia and the CIS states, the trade fairs in Dubai and Moscow have developed into leading marketplaces for innovative products and applications. The experts have them marked in their calendar for the start of 2013. Arabplast has established a position as the leading platform for plastics and rubber in the Middle East.

It takes place from 7 to 10 January 2013 in the International Convention and Exhibition Centre in Dubai. interplastica, which takes place from 29 January to 1 February in the Expocentre fairgrounds in Krasnaya Presnya, Moscow, is the industry’s most important trade fair for Russia and the neighbouring states. Both events have experienced a significant increase in demand for exhibition space, as machine and plant manufacturers, raw material producers, and plastic and rubber processors from around the world register to present their innovations in these two promising markets.

The Middle East and the Gulf States play a prominent role in the global plastics and rubber industry, mainly due to their position in the oil market. The petrochemical industry is still the world’s production and export leader and supplies its goods to more than 150 countries around the globe. The number of plastics processing plants is rising all the time: They are profiting from the fact that Saudi Arabia and the United Arab Emirates (UAE) have been investing on a massive scale in their infrastructure and the diversification of their economies, with the goal of making themselves less dependent on revenues from oil sales. Dubai is considered to be the hub of economic life on the Arabian Peninsula and the gateway to the markets in neighbouring states.

The Arabplast is already taking place for the 11th time in Dubai, once again in the proven combination with Tekno Tube Arabia and Arabia Essen Welding & Cutting. The next edition promises once again to be significantly bigger and more international than its predecessor of two years ago. Together with the two contemporaneous events, it fully occupies ten exhibition halls and is thereby at least one third larger than in 2011. A total of 900 exhibitors from 32 countries will be presenting their product ranges to the professional public. Al Fajer Information & Services are organising the Arab International Plastic & Rubber Industry Trade Show and Conference for the 11th time already. Messe Düsseldorf has been their exclusive partner since 2004 and is responsible for supporting exhibitors from Europe and North America. Arabplast and Tekno Tube Arabia attracted over 18,500 trade visitors in 2011.

In Russia, the progress of important consumer sectors has favoured demand in the plastics and rubber industry. Packaging and consumer goods are of great significance here. The construction industry has also recovered, mainly due to extensive renovation and modernisation work throughout the country, for which products such as insulation material, pipes, window frames etc. are required. In order to take advantage of the excellent opportunities presented by the Russian market, export-oriented exhibitors have been relying on interplastica for many years now.

Top decision makers from the plastics and rubber industry travel from all parts of the Russian Federation to meet here. On the occasion of the last event in January 2012, exhibitors spoke consistently about promising customer contacts and the numerous contracts they had concluded. Around 20,000 trade visitors from Russia and many neighbouring countries came to the Krasnya Presnya exhibition grounds for interplastica and the parallel packaging trade fair UPAKOVKA/UPAK ITALIA.

The upcoming dual trade fair, which is taking place from 29 January to 1 February, is attracting considerable interest from the industry: The organisers, Messe Düsseldorf and its subsidiary OOO Messe Düsseldorf Moscow, are recording stable registration numbers from Russia and a growing demand for exhibition space on the part of international companies. interplastica is experiencing above average growth and the over 600 companies will occupy a net area of around 13,000 square metres.

The greatest number of non-Russian participants is coming once again from Germany and Italy, but China, France, the United Kingdom, Austria and Portugal are also sending official representatives. The presentations of the exhibitors will be supplemented for the first time by the special show “Meeting Point Raw Materials” in Hall 1, which will showcase innovative developments relating to the production and use of raw materials.