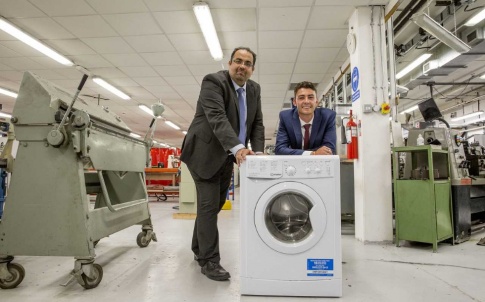 According to researchers at Nottingham Trent University, the solution could save the UK almost 45,000 tonnes of CO2 a year in transportation.

The use of concrete increases appliance weight and creates carbon emissions through the production and transportation of the material.

Knight tested the vacuum formed plastic prototype – which weighs less than 3kg when unfilled – and found it was as effective as a concrete counterweight when filled with water.

“So what we have done is to increase the size of the water container to take as much space as possible,” he said. “There are other ideas to compensate for the difference in density which we are developing with our industrial partner, but they are commercially sensitive to share at this stage.”

The new watertight design cuts the weight of the home appliance by 30 per cent, which in turn lowers the cost of fuel through appliance transportation, also reducing the risk of physical injury when lifting and installing the product.

According to NTU, research suggests that reducing the weight of a truck carrying washing machines by 100kg could save approximately 8.5g of CO2 and 0.35 litres of fuel per 100km in transportation distance.

Around 3.5 million washing machines are sold every year in the UK. If each was fitted with the new lightweight device – which is left unfilled until the appliance is installed – the carbon savings would equate to around 44,625 tonnes of CO2 and a reduced fuel consumption of 183,750 litres, when transported on average for only 50km.

The project has been run as part of a live brief from product design company Tochi Tech Ltd, who are working with researchers and students at the university to find innovative and sustainable solutions to appliance manufacturing.