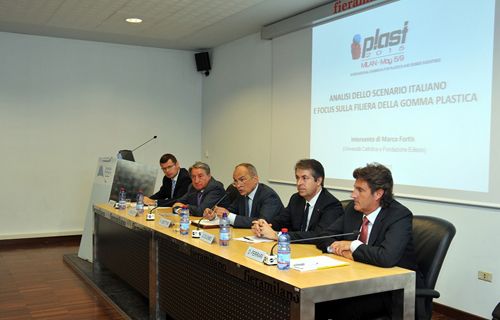 This is the big news announced on the first day of the exhibition. NPE moving from the month of March to May 7-11, 2018, as well as the overlapping with FEIPLASTIC this year, has surely affected such decision but not crucially.

Every operator of the sector knows that PLAST in 2018 would have taken place in a year already crowded of important exhibitions: PLASTINDIA (in February), NPE (as just mentioned from 2018 in May) and, in addition, CHINAPLAS (yearly exhibition held at the end of April when in Shanghai and at the end of May when in Guangzhou) and also the already mentioned FEIPLASTIC every six years (being biennial).

It is known that those above are very important events not only for Italian but also German manufacturers and more in general for everybody working in the plastics and rubber field.

A huge effort on a organization and commercial but also (and most of all) economic level for small and medium enterprises that are the core of this sector.

In light of this we have decided to break up, just for once, our 3-year cycle. In accordance with their exhibitions’ schedule (already congested for the next three years), FIERA MILANO proposal of the last week of September 2017 made to the Board of Directors and Committee of ASSOCOMAPLAST – Italian Plastics and Rubber Machinery and Moulds Manufacturers’ Association – (controlling 100% of PROMAPLAST srl, PLAST Organizing company) appeared to be the best solution. A favorable moment, that separates PLAST from a very hard cycle of events taking place in March/May 2018. This solution has satisfied the majority of our executive bodies.

In addition, PLAST will be taking place three weeks away from FAKUMA (which dates are not yet official, but it is historically held in the third week of October), a reasonable time to let everybody working in the automotive sector (the main target of such exhibition) organize.

First reactions of exhibitors are all positive and we hope that this decision will strengthen PLAST, further increasing the number of visitors and exhibitors.