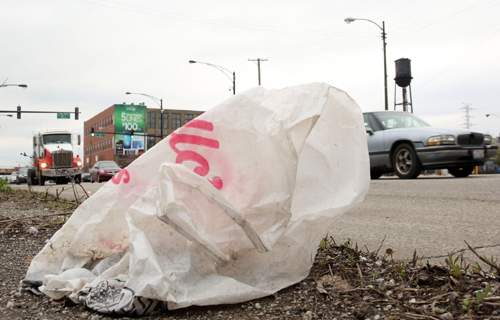 Superior Court Judge Teri Jackson has rejected arguments from plastic bag manufacturers and upheld a San Francisco ordinance that would ban plastic bags in retail locations and food establishments in the city. Businesses will be required to charge a 10-cent fee for paper or compostable plastic bags they provide to customers.

The ordinance is expanding a 2007 law that banned supermarkets and chain store pharmacies from providing single-use plastic bags. This ban was the first of its kind in the nation. This new ban will extend to all retail establishments next month, and then to all restaurants starting next summer. “I applaud Judge Jackson for her careful consideration of the issues, and for rejecting arguments by plastic bag manufacturers that clearly misapplied state law,” said City Attorney Dennis Herrera, in a press release.

“San Franciscans deserve the same benefit other jurisdictions enjoy from an effective policy that has been shown to reduce the proliferation of single-use bags use by as much as 95%. This is good policy, on sound legal footing, and it will help move San Francisco toward its ambitious ‘zero waste’ goals.”

The Save the Plastic Bag Coalition, an independent organization, has filed similar suits against the cities of Santa Cruz, Long Beach, Palo Alto and Oakland.

Joseph said they hope these lawsuits will get cities and counties and the public to “learn the truth about plastic bags and the alternatives, instead of relying on myths and misinformation.”

“That’s what an Environmental Impact Report is supposed to do,” he said. “Provide environmental information, not misinformation.”

The Save the Plastic Bag Coalition argues that paper bags are actually more harmful to the environment than plastic ones. The San Francisco Department of the Environment litter audit conducted before plastic bags were banned in that city showed that plastic retail bags were 0.6% of all litter, according to the coalition.

If the ban goes forward, many American manufacturing jobs could potentially be lost in the plastic bag industry, Joseph said.

However, he sees it as a boost for paper bags as well as a “huge profit generator for the retailers who used to provide carry out bags for free and now are selling them at a profit at the expense of their customers.”

Joseph said that it would be a mistake for the plastics industry to think this is only about bags.

2013: A better year for automobile production; analyst forecasts 5%-plus growth

DME Company Names Froney VP and GM for the Americas