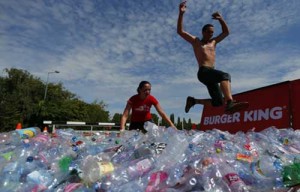 “There is no conclusive evidence to suggest that use of PET or additive like antimony for pharmaceutical packaging may leach substances beyond limits that pose threat to human health,” the panel told the National Green Tribunal (GRT) in a report.

Uttarakhand-based NGO, Him Jagriti, has petitioned the NGT that given India’s extreme variations of temperature, it fears that PET containers leached harmful chemicals like phthalates and heavy metals.

PET is made from mono ethylene glycol and purified terephatic acid. Of the 600,000 tonnes of PET production, the pharmaceutical industry uses around 16 percent, accounting for around 100,000 tonnes every year.

The NGT bench had earlier indicated that it favoured “restriction” on plastic packaging of products including PET bottles and granted a final opportunity to various plastic manufacturing units and others to file their written submissions in the matter.

The panel, set up by the health ministry in August 2015 under the chairmanship of former biotechnology secretary M.K. Bhan, asserted that PET could be used safely as a packaging material for drugs under a regulatory system and process.
“PET does not require use of phthalates or any plasticizers in the manufacturing process,” the report said.

The panel was set up to assess the health and environmental impact of using PET or plastic container for packaging drugs after NGO Him Jagriti Uttaranchal Welfare Society petitioned the tribunal that leaching of heavy metals, phthalates and PET was harmful to the environment.

The tribunal directed the ministry to form the panel to study science behind the issue.