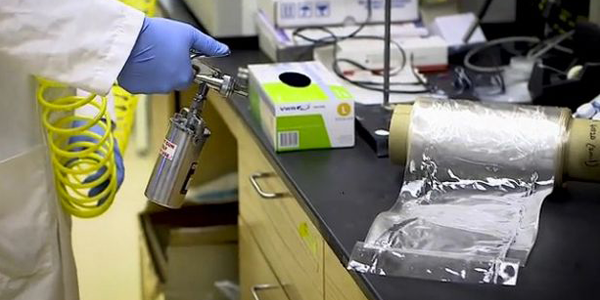 Despite more companies reducing the amount of plastic in packaging or creating more sustainable packages, a majority of consumer packaging is plastic. A team from Georgia Institute of Technology want to add to the growing list of sustainable alternatives with a new type of flexible plastic packaging.

The new synthetic creation would use a material taken from crab shells and tree fibers that could form a plastic-like substance. Chitin — a fibrous substance — forms a major part of an arthropod’s exoskeleton. Tree cellulose could also be a much more sustainable and easily recyclable alternative. In order to create the packaging, reserachers sprayed multiple layers of chitin and cellulose togehter to form a flexible film that rivals popular plastic packaging wraps.

“The main benchmark that we compare it to is PET, or polyethylene terephthalate, one of the most common petroleum-based materials in the transparent packaging you see in vending machines and soft drink bottles,” said J. Carson Meredith, a professor in Georgia Tech’s School of Chemical and Biomolecular Engineering. “Our material showed up to a 67 percent reduction in oxygen permeability over some forms of PET, which means it could in theory keep foods fresher longer.”

The team created the film by suspending the cellulose and chitin nanofibers in water. Once wet, they spray the fibers onto a surface and alternate the layers. Once everything dries out, the resulting substance is transparent, stronger than most plastics, and entirely compostable to users.

“We had been looking at cellulose nanocrystals for several years and exploring ways to improve those for use in lightweight composites as well as food packaging, because of the huge market opportunity for renewable and compostable packaging, and how important food packaging overall is going to be as the population continues to grow,” Meredith said.

The discovery actually happened rather serendipitously, according to the team. They’d been looking into the potential with chitin for other reasons. A simple query was asked by a team member that got the rest of the researchers thinking: could chitin be used in food packaging?

“We recognized that because the chitin nanofibers are positively charged, and the cellulose nanocrystals are negatively charged, they might work well as alternating layers in coatings because they would form a nice interface between them,” Meredith explained in a press release.

One of the most important elements of effective cling wrap or other plastic food packaging is not allowing oxygen to pass through – thus keeping food fresher for longer. The new material excels at this, accordign to the team, because of the unique crytstalline structure it forms. That structure serves as a gas barrier between food and the oustide world.

“It’s difficult for a gas molecule to penetrate a solid crystal, because it has to disrupt the crystal structure,” Meredith said. “Something like PET on the other hand has a significant amount of amorphous or non-crystalline content, so there are more paths easier for a small gas molecule to find its way through.”

Next steps for the team in making this new plastic commercially viable include bringing down production costs and simplifying manufacturing techniques. There wouldn’t be a problem in synthesizing the tree cellulose, the researchers noted, but chitin proves more difficult to work with.