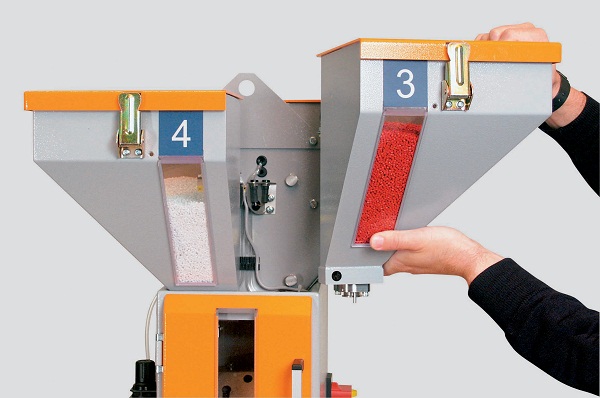 At the beginning of 2012, motan-colortronic ag, Hunzenschwil, Switzerland, secured a prestigious order worth millions (of Euros) from a customer in Colombia. IBERPLAST S.A., with its headquarters in Bogotá, had started a substantial modernising project in 2011. The well-known Colombian packaging manufacturer is in the process of relocating its plastics processing to a new manufacturing facility. Starting in the autumn of 2012, preforms, caps and bottle crates are to be injection moulded there in extremely large quantities.

Order development
The IBERPLAST project will provide a high-tech raw materials handling system for the plastics being processed, such as PET, PP and PE, as well as any regrind being used. Just for this project alone, an investment sum of approximately two million Euros was made available. Competition for this prestigious project was fierce and motan-colortronic ag managed to beat stiff European and American competitors to win the project by offering a technically as well as an economically convincing proposal. In February 2012 IBERPLAST and motan-colortronic ag signed contracts.

Crucial elements for the award of the contract were motan-colortronic’s ability to provide an energy efficient and flexible system offering the highest levels of quality and operating reliability. Other deciding factors were
motan-colortronic’s guarantee for on time completion, that all project documentation would be provided in accordance with the offer and that IBERPLAST would be benefit from excellent technical support and service.

Complementary to this, motan convinced IBERPLAST with many technical advantages, such as being able to offer material conveying using vacuum rather than pressure. The client also appreciated that motan-colortronic took full account of the local production requirements with precise homologation of technology, e.g. silo storage, centralised material conveying, dosing and mixing. The fact that the production location in Bogotá is 2600 m above sea level had to be taken into account.

Consequently, due to the much thinner air, the design of the conveying system equipment had to be adapted. Beat Amrein, sales manager for South America at motan-colortronic: “We have a tight time schedule to get the IBERPLAST project installed and commissioned so that the new production facility is fully operational in the autumn of 2012. But I know we can manage this because I am very lucky to be supported by such an excellent and competent team of people from engineering through to order processing, installation and commissioning.”

Technology overview
The first shipments of components for the centralised raw materials handling system were delivered on schedule to the new production site in Bogotá. Installation started in June 2012 – as planned. The internal and external silos and raw materials handling system – controlled and managed by the VISUnet central control – will feed the injection moulding and extrusion machines. The centralised vacuum system has been designed with the latest technology and energy saving features: the machine material loaders – either running or turned off – have a direct influence on the performance of the vacuum system and thus it’s energy consumption.

Nine GRAVICOLOR 600 R gravimetric gain-in-weight units will dose and mix two components, namely virgin and regrind PET, these are for the manufacture of preforms. Nine further GRAVICOLOR 300 units to be deployed for optimal gravimetric dosing and mixing of virgin and regrind PE each supplied with a C-Flex M dosing unit, mounted below the unit, for pigment dosing. The central control unit monitors all functions and production parameters. VISUnet offers visualisation for all WEBpanel control elements.

The motan Group
The motan Group, with its headquarters in Konstanz, Lake Constance, in Germany, was founded in 1947. As the leading provider of sustainable materials handling, the company is active in injection moulding, blow moulding, extrusion and compounding, in-line and chemicals. Part of the application-orientated product spectrum are innovative modular systems solutions for the storage, drying and crystallisation, for the conveying, dosing and mixing for plastics manufacturing and processing industries.

Manufacture takes place at various production locations in Germany, India and China. motan distributes its products and systems solutions via its regional motan-colortronic centers. Currently, more than 450 employees contribute to an annual turnover of approximately 100 million Euros. As a result of its network and its many years of experience, motan offers its customers exactly what they actually require: solutions with genuine added value.

AA ROBOTICS LAUNCH HYUNDAI ROBOTS IN THE UK AND IRELAND

NGR displays a variety of efficient recycling solutions at Plast 2015

Author plasticsinfomart 17
highly attended online event with a total of 877 registrants together with Styrenics Circular Solutions (SCS), the value chain initiative to increase the circularity of styrenic...
Read More