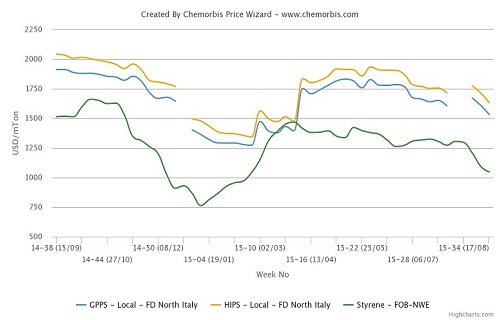 According to ChemOrbis, PS transactions for September started to be reported with sizeable drops from August in Europe this week. Drops of up to €100/ton are passing on transactions depending on supplier. The reduced availability from Central European producers resulted in comparatively modest decreases of €50-70/ton from these sellers though. Some converters reported purchasing their basic monthly requirements this week, but said that they did not build up stocks because they expect to see more attractive prices in October.

Falling styrene costs in Europe support these buyers’ opinions as spot styrene prices plummeted by around $200/ton on FOB NWE basis just in a week, reaching the lowest average weekly levels since February this year, according to data from ChemOrbis Price Wizard.

ICE Brent crude oil futures retreated by almost $3/bbl in total during the same period as a driver behind the styrene plunge. A styrene shutdown at Trinseo caused tight supplies for the monomer last month, while good amounts of import styrene cargos from the US are reportedly finding their way to Europe which eased supply concerns recently.

In Italy, PS cargos were traded with €80-100/ton drops this week while decreases were smaller in Belgium and France as some sellers did not concede to the entire decrease on September styrene contracts.

A trader reported having very limited Central European PS stocks left from the previous months and said he is nearly sold out. “Our supplier is not producing material after the fire that occurred at their plant in August. We expect the source to resume operations on September 15-20 and to restart PS deliveries in late September,” stated the trader.

A buyer paid decreases of up to €100/ton from August to meet his needs. “Although we made inquiries to our regular suppliers for Central European and Egyptian PS cargos, distributors had no allocations for this month. Looking at upstream costs, we expect refreshed price cuts for October though,” the converter noted.

“We heard about larger decreases from our competitors whereas we only applied €50/ton discounts due to reduced supply from our West European PS supplier given the planned maintenance at their plant,” a trader in France reported.