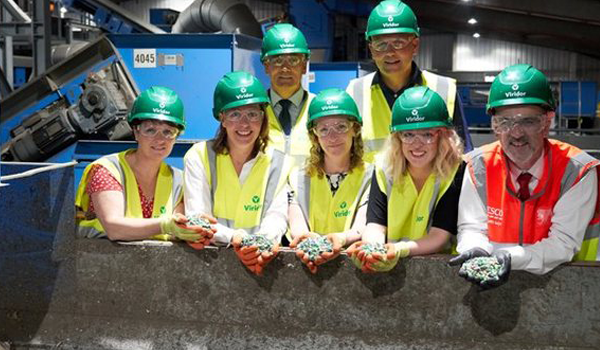 From July onwards, 120 tonnes of black plastic — eight million items — will be recycled each month, with the volume of material increasing over the next 18 months.

Recycling black plastic proves highly problematic for recyclers, with numerous attempts made to find alternatives or develop effective recycling processes. Over 1.3 billion black CPET trays are used annually in the UK but, although the material is technically recyclable, it has been impossible to effectively sort them from other materials at recovery or recycling facilities. The primary reason for this has been that the main pigment used to colour black plastic — carbon black — is undetectable by the near-infrared optical sorting equipment, as light is unable to pass through.

Viridor has stated that working with Faerch Plast and the retailers across the supply chain has enabled the company to optimise the sorting process, with PET — the most common type of black plastic — being the main polymer targeted. The plastic is sorted at Viridor’s recycling facility at Rochester, one of the UK’s most advanced optical sorting facilities.

The process currently involves some manual intervention, with Viridor stating that there are plans in place to increase automated capacity, with mechanisms in place to process black plastic with or without near infrared detectable colourants. However, it remains to be seen exactly how this will work in practice.

After the black plastic is separated, it is added to the already recycled coloured plastic stream and taken to the polymer reprocessing plant at Skelmersdale in Lancashire, where it is washed and turned into flakes and pellets that are then sent to Faerch Plast, where they are shaped and made into food packaging.

The packaging will initially be used for Marks and Spencer, Sainsbury’s and Tesco products, and Viridor’s Commercial Director Paul Ringham has commented that he feels collaboration across the supply chain, with retailers sustaining demand for the recycled material and packaging by Faerch Plast, is key to the project’s success.

Ringham also commented that the collaboration was evidence of the UK Plastics Pact’s goals being put into action to achieve substantial, real change that the public has been calling for.

Viridor was a founding signatory of the pact, which was launched in April this year and is formed of a range of businesses across industries — including Tesco, Sainsbury’s and Coca Cola — that have committed to eliminating ‘unnecessary’ single-use plastic packaging by 2025. The pact sets out a more responsible and resource-efficient approach to plastics and provides the framework for collaborative action.

Ringham added: “The project team, working together since January, has proven that black plastic from household mixed recycling can be recycled into high quality mixed coloured ‘jazz’ flakes to create food grade packaging.

“The breakthrough took place at two Viridor facilities, the plastics recycling facility at Rochester, which is one of the most advanced optical sorting facilities in the UK, and the polymers reprocessing plant at Skelmersdale in Lancashire, which takes recycled plastic and creates flakes and pellets to be used in the manufacturing process.”

The project has garnered praise from government, with Environment Secretary Michael Gove saying: “This global leading scheme has the potential to mean the UK exports less of its waste, could divert huge amounts of plastic away from landfill and prevent virgin plastic entering the market in the first place.”