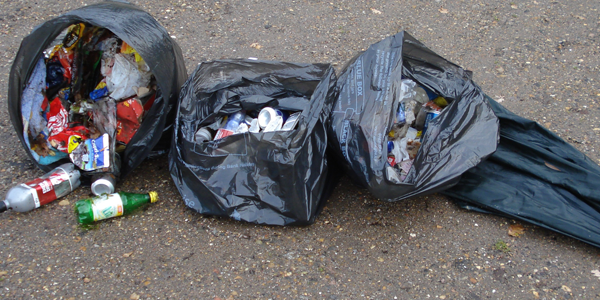 The Plaza West plastic drop-off and recycling project is in its third week of collecting acceptable plastics and keeping them out of the landfill.

Diane and Gary Brooks are the organizers of the volunteer plastic-recycling project. Mafi Hamed of Plaza West was so impressed with the success of the 4Ocean beach cleanup organized by Brooks, he asked her to work with him on a three-month trial project to collecting plastics for recycling.

“The success of this three-month project depends on the St. Croix community working together to reduce plastics in the landfill,” said Hamed.

He is paying to crush and ship all plastics off island for recycling. If the project proves successful, Hamed will foot the bill for the continuation and the duration of the project, he said.

Through Facebook, the community has been informed of the pick-up and drop-off points across the island. Volunteer drivers are picking up plastics at Cane Bay near EAT at Cane Bay, Expressway Market near Fusions Restaurant and at Caribbean Breeze Apartments and Vacation Homes on Prince Street in Frederiksted.

“New locations will be added weekly as the project continues to grow and the community is aware of how to become involved,” said Brooks.

Isabel and Sofia Melendrez, sisters who moved from New Mexico to St. Croix two months ago, are used to recycling, said their mother Brittany. They love being a part of this community by helping. The girls had two bags of plastics to contribute to the cause.

Michael Hartlage drove from Cane Bay with his truck-full of 15 bags, double the amount from the first week. It’s a growing movement, he said.

The 4Oceans volunteer project was completed on Aug. 5 and Hamed and Brooks put a plan together on the next day to begin collecting plastics island wide. The first day of collections began Aug. 25.

“The response has been great all around and we will continue every Saturday, 7 a.m. to 11 a.m., for the drop-off at Expressway and Cane Bay and 7 a.m. to 12 noon at Plaza West,” Hamed said.

“Plaza West has been sending recycled materials off island, including thousands of pallets, for the last three years,” said Hamed.

“We will need a third driver very soon,” she said. “It’s exciting and encouraging to work with the community on this worthy, worthy cause.”

Not all plastics are acceptable. Very dark colors, such as red or purple, cannot go in with the clear or light colored plastics. Brooks husband is the “plastic police” and he checks everything going into the bags.

Kathy and Randy Tiddark, owners of Ocean Breeze Apartments and Vacation Homes, will accept collections throughout the week. Their drop-off collection has increased over the three-week period, said Kathy. She asked people to call her at 340-227-9853 before dropping off.

The schools have become involved and students are happy to be a part of this project, said several parents who accompanied their youngsters to the drop-offs.

Hamed and Brooks communicate every day, she said.

“We stay on top of the daily and weekly progress of the project. There is so much to keep abreast of and keep a close watch on,” Brooks said.

“We want this to work. A successful three-month trial will give us a continuation of the project,” he said.

Brooks also noted the cost of the project is being carried by Hamed.

“He is asking nothing of us, but to keep the plastic collection going,” Brooks added.

At the suggestion of Stacie Haynes Carroll, the Plaza West Project provided a trash can Friday at the cruise ship pier in Frederiksted for passengers on the first ship of the season. “Plastic Only RECYCLE Here” read the sign over the receptacle.

“This is a first for our visitors and they welcomed it. I like the sign,” said Hamed.

As the noon hour drew close, trucks from different drop-offs arrived, packed with huge bottle-filled bags. Young volunteers descended on the truck and hurled bags onto the pile, making their contribution to cleaning up the island.

“The community is encouraged to continue,” Brooks said. “Tell your family, your neighbors and your friends. Teachers are starting groups in their classrooms. Everyone is getting involved. As a community, we can all make it work. St. Croix rocks.”