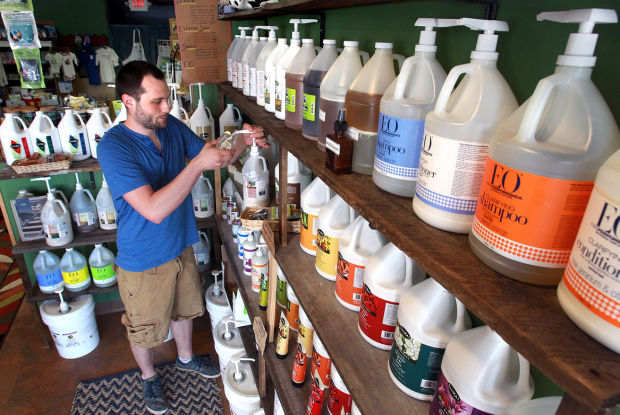 No more mountains of discarded bottles, immortally entombed in the nation’s landfills; no more massive islands of garbage marauding through the oceans, leaching potentially dangerous chemicals into the world’s food and water supply.

Spurred into action by news articles detailing the staggering environmental statistics and encouraged by the existence of similar businesses in California, the Larsons brought the refill revolution to La Crosse.

“It’s such a simple thing that does a lot of good,” Mary Larson said. “There’s no reason not to refill.” They buy their products in bulk – certified organic soaps, shampoos and conditioners in refillable pump jugs, non-toxic laundry soap in 55-gallon drums – and sell them by the ounce. Customers can bring their own refillable containers, or purchase reusable ones there at the shop.

“I’ve refilled everything from spaghetti sauce jars to ketchup bottles,” Mary Larson said. Rooted in their waste-reducing principles and boasting a scrupulously vetted supply chain of natural, earth-friendly products sourced from within the United States whenever possible, Full Circle has refilled nearly 2,000 containers since opening and saved about 320 pounds of plastic waste from entering the municipal waste system, said Josh Larson, who tracks each sale and refill.

The business model itself is rather unique in the La Crosse area: Its owners, of course, hope to make a living selling refillable products, but at its core, Full Circle exists as a conduit to help consumers live a more sustainable lifestyle. Nick Nichols, the county’s sustainability coordinator, cites buying in bulk as one of the first steps consumers can take to adopt eco-friendly shopping habits and promote sustainability through their purchasing power.

Local grocery stores, particularly the People’s Food Co-op in La Crosse, offer bulk items and encourage patrons to bring their own reusable bags; the Habitat for Humanity ReStore, the Salvation Army and Goodwill and other thrift stores sell recycled goods. La Crosse and Onalaska have made great strides in their recycling programs in recent months, nearly doubling their rates following a switch to automated carts and single-stream recycling that expanded the types of plastics and other materials  eligible for recycling.

“The convenience has made it easier for people to participate,” Nichols said.However, even with seven types of plastics now able to be recycled, there are still more than 100 types that are not recyclable. Plastic products that come into the county landfill are not getting recycled, Nichols said, and plastic thrown out in residential waste is taken to the Xcel Energy waste-to-energy plant on French Island. Burning plastic is far from ideal, but Nichols says it’s better than the alternative: Burning coal.

Even with regulatory agencies like the U.S. Food and Drug Administration testing products and compounds for safety, such as the ongoing study on the effects of BPA, only a fraction of the chemicals used to manufacture plastics have been thoroughly tested. “With plastics, testing tends to be the exception,” Nichols said. “Not the rule.”

Author plasticsinfomart 90
Recycling, despite its green connotations, can be a messy business. In China, more than 400,000 companies are engaged in plastic recycling, but 70 percent...
Read More

Another Us Bag Ban Fails – This Time in Connecticut

Author plasticsinfomart 77
Laird Plastics has been a member of the Specialty Graphic Imaging Association (SGIA) for a decade and has been helping to develop the SGIA’s...
Read More