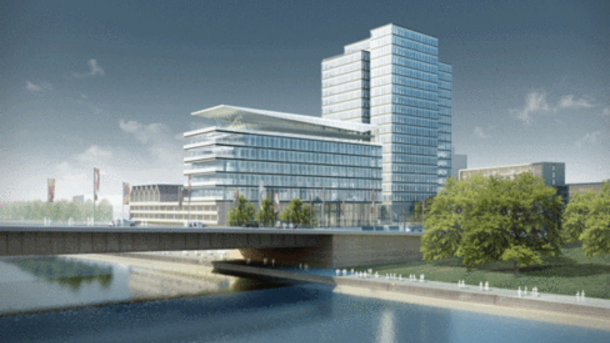 Cologne – LANXESS AG has successfully completed the move of its Group headquarters from Leverkusen to Cologne. With its approximately 1,000 employees, it now occupies the LANXESS Tower at Kennedyplatz 1 in the district of Deutz. The specialty chemicals company will now manage its global business from Cologne. The new Group headquarters unites all of the company’s central management functions under one roof for the first time.

“The move has made us more efficient,” said Axel C. Heitmann, Chairman of the Board of Management of LANXESS AG, at the official inauguration ceremony today, Tuesday, September 3. “Particularly against the backdrop of our current situation, the concentration of our forces in the LANXESS Tower is incredibly important. We intend to carry on with our success story and the new headquarters will certainly play its part.”

He pointed out that with its location in the flourishing economic and media hotbed of Cologne, the LANXESS Tower provides everything LANXESS needs to conduct its global business. “Not only is the building equipped with modern technology, it also represents sustainable and responsible architecture,” said Heitmann. He added that Cologne also has an infrastructure unique in North Rhine-Westphalia with excellent transport connections. Furthermore, the city is a renowned academic and research center, making it a magnet for top talent. “We are very comfortable here. The new site and the LANXESS Tower will have a positive effect on our corporate culture.”

Garrelt Duin, Minister of Economics, Energy, Industry and Commerce in the North Rhine-Westphalia regional government, takes a positive view of the move of the LANXESS Group headquarters. “As minister for economic affairs, and having a particular interest in chemistry, I am very pleased that LANXESS chose Cologne. It underscores how strong North Rhine-Westphalia is as an industrial location and how successful the company has become since it was founded not even a decade ago. It is now a leading player in the European chemicals industry.”

Cologne’s Mayor Jürgen Roters also believes the specialty chemicals company’s move is a significant boost for the city. “I am pleased to be able to welcome LANXESS AG with its corporate headquarters and approximately 1,000 employees to Cologne. This relocation is an impressive acknowledgment of Cologne’s credentials as an industrial location. I am very proud and see this decision as proof of the city’s ability to attract global players. The LANXESS Tower is an important landmark that is a positive addition to our city landscape. I firmly believe that the employees will find Cologne to be a great city to live and work in. Welcome to Cologne, LANXESS!”

State-of-the-art working environment in the LANXESS Tower
Alongside office floors with their contemporary design, the 22-story LANXESS Tower also contains a separate conference floor with 13 meeting rooms and a communication center with space for approximately 400 people. The building’s employee restaurant and cafeteria offers employees a wide range of cuisine from which to choose. LANXESS also offers a variety of options for traveling to and from work. The LANXESS Tower has an underground parking lot, with additional spaces available at the nearby LANXESS arena. Employees also have access to plenty of bicycle stands, and a shuttle bus runs between Leverkusen and Cologne. LANXESS also offers a job ticket for public transport that has already been taken up by 70 percent of the employees, who work in the LANXESS Tower.

Interior construction and moves completed on schedule
“Except for a few finishing touches, the interior of the LANXESS Tower is complete. The building is almost 100 meters high and has some 38,500 square meters of floor space,” explained Norbert Mimberg, project manager at LANXESS. Around 6,000 roll containers and packing boxes were transported from Leverkusen and Dormagen to Cologne between July and August in three major waves.

Three-year construction period
Construction work on the LANXESS Tower and the Rheinetagen began on March 1, 2010. By the time it was completed, 50,000 metric tons of concrete and other mineral demolition waste had been removed from the site. At peak times, more than 400 workers were busy at the construction site. The first stage involved removing a basement building that previously connected the two office blocks and was used as a garage and access route. The demolition work detached the two office buildings, which are now separated by a public square, Kennedyplatz, with views of the neighboring abbey and, on the other side of the Rhine, Cologne Cathedral. Both buildings have been completely gutted and redesigned from the ground up. The 2,500 glazing elements in the LANXESS Tower’s seamless, transparent facade provide open views in every direction.

Subsequent moves in Leverkusen and Langenfeld
Meanwhile, Saltigo GmbH, a wholly-owned subsidiary of LANXESS AG, is moving its corporate headquarters from Langenfeld to Leverkusen. On September 9, the company’s workforce of over 100 will be moving into what used to be LANXESS’ main building (K 10) at the CHEMPARK Leverkusen site. “The arrival of our fine chemicals specialist Saltigo will strengthen and further expand the Leverkusen site as LANXESS’ most important location worldwide for the agriculture megatrend,” says Werner Breuers, member of the Board of Management of LANXESS AG. In the future, a total of 550 employees will work in K 10. Langenfeld is the other main LANXESS site to be affected by the relocations. Global Procurement & Logistics will be taking over Saltigo GmbH’s Katzberg building in Langenfeld.

Author plasticsinfomart 76
The free-to-attend event will feature a 3-day conference, a unique online networking opportunities, a virtual exhibition, as well as the announcement of the 2020...
Read More