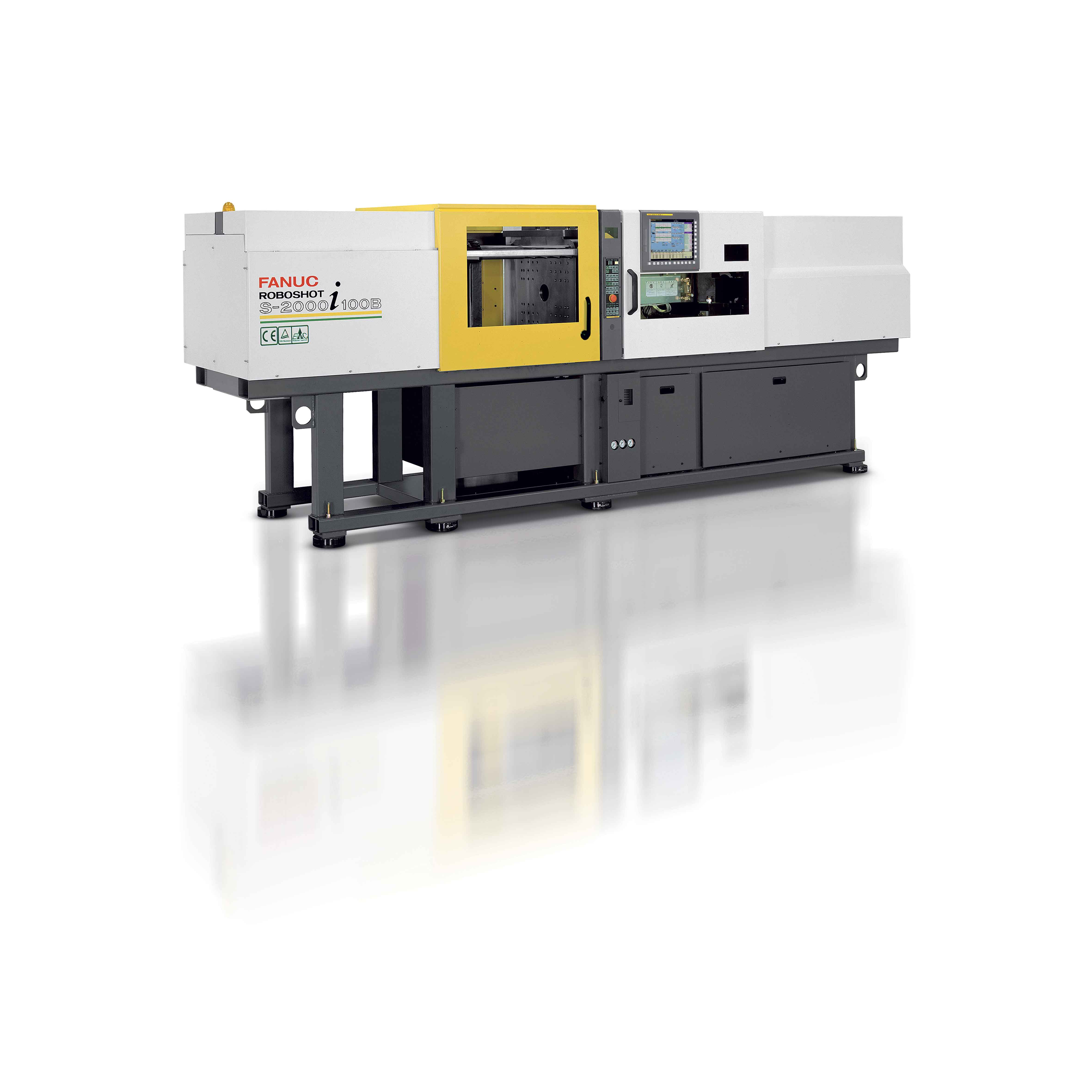 To achieve this, the Roboshot machines are equipped with energy recovery control, torque dependent dosing control – PMC 2 and 3 – as well as with the specific backflow monitor and, finally, with efficient AI mould protection. Importantly, Fanuc proves its economic and technological competence – in conjunction with its renowned systems partners – in the areas of two-component injection moulding and manufacturing cells with the highest possible flexibility. High precision granulate mixing and dosing is controlled by motan materials management equip-ment.

Two-Component applications
Close cooperation with Otto Männer GmbH, Bahlingen, Ger-many, has resulted in space-saving and economic options for two-component applications in small and micro volumes. The Fanuc Roboshot S-2000i-150B has been enhanced with an inte-grated rotary drive and a flexible attachment option. It has there-fore been equipped with a „duo-män“ bolt-on unit as second injection system. The fully electric „duo-män“ injection unit is mounted directly to the mould half of the nozzle side. Using the 8-cavity 2K mould provided by Schneider two-colour felt-tip pen caps are produced in PP (16.5 grams per component) in a 17 second cycle and deposited by handling unit.

Electric/Electronic applications
Filigree functional parts with many complex geometries, as pro-duced in very large quantities in the electric and electronic in-dustries, require maximum precision when it comes to surface finish, contour accuracy, weight and reproducibility. A well-known customer provided Fanuc with a complex mould for the manufacture of connectors. With a shot weight of 22 grams four functional components in PBT are produced simultaneously in a cycle time of 12 seconds. Part removal is handled by a three-axes linear robot – equipped with Fanuc servo drives and control – by systems partner Hi Tech Automation.

Fundamental energy saving
The Roboshot electric IMM operates with extremely low energy consumption. Its control monitor indicates the actual power con-sumption and regenerated power in a graphical and a numerical display. Also, the accumulated power over a specified period, the trend of power consumption and power demand are dis-played. Energy savings are realized by the following features: Fanuc’s superior motion control technology for high efficiency and power recovery.

The feature of energy recovery – whereby the servo-drive motors in the Roboshot machines generate electrical energy as they de-celerate, when closing and opening the mould after locking – contributes a tremendous potential for reducing energy costs. “We utilize kinematic and turn it into regenerated power instead of discharging thermal energy into the air,” says Wolfgang Haak, Applications Engineer at Fanuc, and adds that “the amount of energy produced in this way depends on the machine and proc-ess, but it amounts to around 10 percent of power saved on aver-age, on top of the 40-60 percent lower energy consumption of electric machines as opposed to hydraulic ones.

Today, we must not forget the issue of CO2 emissions: the greater the energy requirements of a manufacturing plant, the higher are the CO2 emissions. With our Roboshot machines, less energy is required from the national power grid, which means lower emissions and the protection of our environment”.

Moving on to the control system used by the Roboshot IMMs, Wolfgang Haak points to the actual energy displayed in KWh on the control system screen. He added: “The customer doesn’t have to take a specific external energy measurement. The Fanuc system is the most effective transparency tool for customers with regard to their energy balance.”

Fanuc Roboshot highlight at a glance
Sustainable process capability – stable moulding through Back-flow Monitor and Precise Metering Control PMC2&3: The be-haviour of melt in the cylinder is detected and shown on the screen. The first feature is the Backflow Monitor which shows the backflow of material at the time of injection on a screen. This allows conclusions (feedback) regarding the stability of the in-jection, the closing characteristics of the non-return valve as well as its status. The second feature is the Precise Metering Control (PMC2&3). Residual pressure in the screw flights compensates volume displacements at the end of the dosing cycle. It guaran-tees a constant dosing volume and minimizes weight deviations of the parts to be moulded.

The AI mould protection and AI ejector functions of the Fanuc Roboshot series of IMMs are very effective in safeguarding a longer lifetime of the mould. The AI mould protection function stops the platen motion instantaneously as soon as it detects for-eign parts or obstacles remaining in the mould – thus preventing damage to the mould. It also averts damage to the slide core and inserts when the mould is opened. Furthermore, the AI ejector function is very effective in preventing damage to the ejector when it moves forward or backwards. The machine reacts before damage can occur at the mould, as soon as an ejector’s move-ment starts to stiffen up.

Bosch Packaging introduces new SurePOUCH VFFS machine in the US

Italian machinery exports grew by 11% in first half of 2012