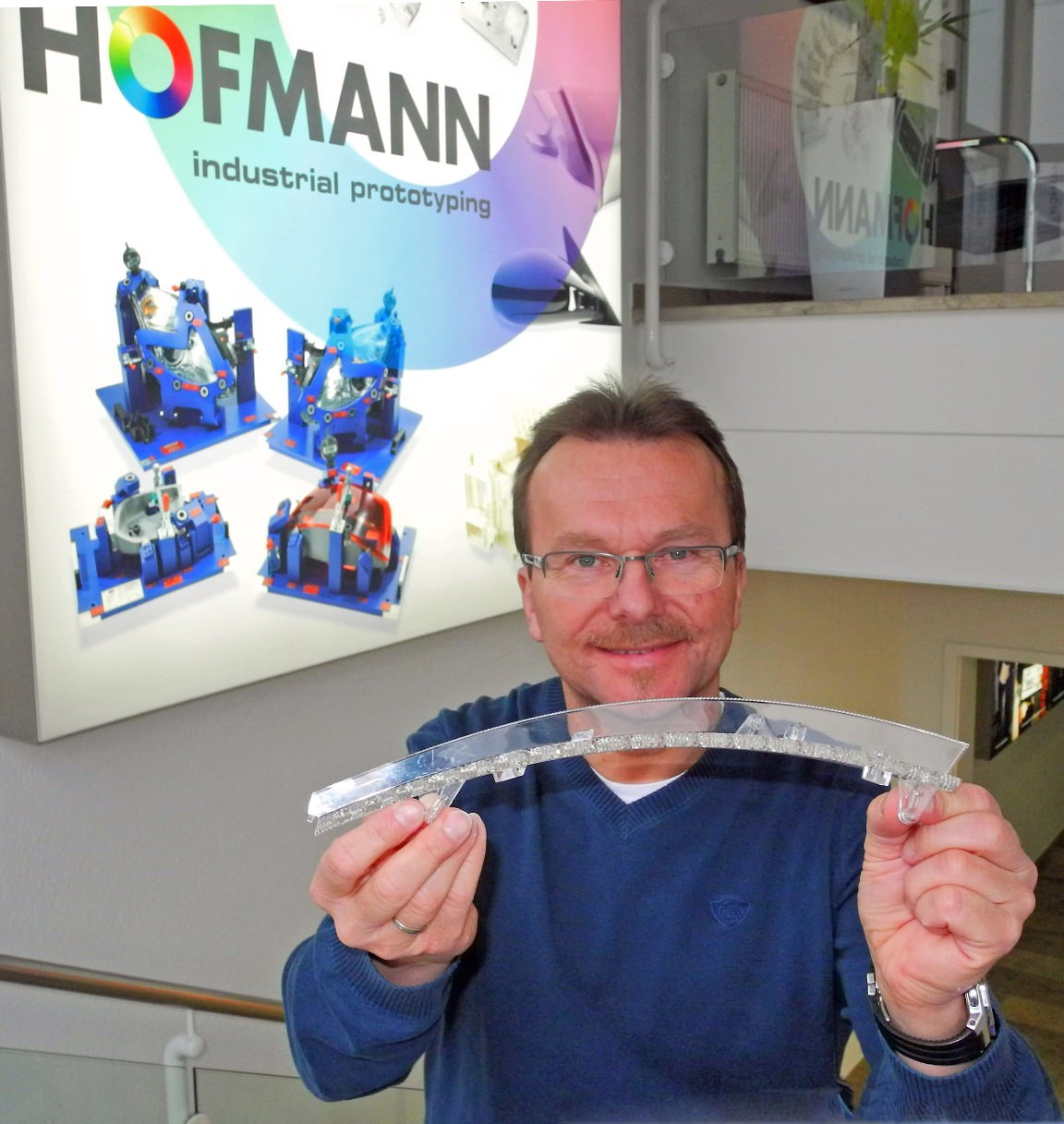 Lichtenfels, August, 28th, 2014: Automotive lighting is an interplay of function and design. It should be functionally outstanding and contribute to the unique look of a vehicle. For the new Porsche Macan, Hella developed a completely new rear lighting system with light strips for guiding LED light. The functional principle of these patented “Edgelights” for a strip-form signal light provides a new level of quality in light for the safety-related brake light function. Using this approach, the signal light can be integrated flexibly and in a space-saving manner into the outer skin of the vehicle body. An observer sees signal lights which have been smoothly integrated into the rear of the vehicle, and which give the Porsche Macan its distinctive appearance.

The heart of the brake light is a thick-walled part made of PMMA, which is the so-called light module or light strip. This part, which has a highly complex prism geometry and reflective qualities for light guidance, was developed in partnership with Hofmann Innovation in tool making and model making. The light module also required the production team at Hella to fulfil high standards in production quality. A thick-walled PMMA body in 2K technology which is absolutely distortion-free was needed here.

“Edgelights” are highly complex light strips for rear lighting systems. In combination with other individual parts, “Edgelights” are part of the safety-relevant functioning of the brake lights in the rear lighting system of a vehicle. The design for the Porsche Macan chosen by Hella consists of three component groups. In addition to the “Edgelight” light modules, the rear light component groups consist of other components usually found in rear lights. This includes lenses made of PMMA in four colours (red transparent, grey transparent, black opaque and light red transparent), which are injection moulded using 3-step technology. The heavily tiered external contour of the upper light lens is unusual.

Demanding parts require partnership over the entire life cycle. One-stop shopping is considered to be a strategic method in this. Hofmann’s expertise is generally required as early as the initial development stages, and contributes to the design of series tools and production processes. “The light module is subject to high expectations in terms of design, surface look and function,” explains Friedrich Vosswinkel, Project Manager at Hofmann. At the same time, the customer expects a design which is optimised for plastics and which ensures process stability during production, and is completely distortion-free.” In this regard, Hofmann offers trial and pilot production in its state of the art technical centre in Lichtenfels. Hofmann’s production specialists were sought-after discussion partners for the production team at Hella before SOP. Friedrich Vosswinkel: “The higher the requirements for a component are set, the more conservative the view of the production team concerning stable processes.”

Hella manufactures the series-production “Edgelights” from transparent PMMA on turning tools, as multi-component parts, using a 2-step process. Each tool produces a left-hand and a right-hand component in each cycle. They are pre-injected and finish-injected using 2K technology. Here, the challenge for production is in the correct geometrical forming and absolute cleanliness of the “Edgelights”. These requirements are essential to allow the light beams to shine with the desired intensity. After cooling down, the light modules are delivered as individual parts to the rear light production facility.

Demouldability and no distortion as challenges

In order to achieve the required light values, the thick-walled PMMA part, which is made of Altuglas HT 121 or Plexiglass 8N, requires the highest standards in the 2K process for the seams. A further decisive factor is the highly complex “prism geometry” for the entry and exit of the LED light. As part of tool development, it was the task of the tool making company Siegfried Hofmann to develop a 3D contour which would allow maximum light output at the point of emission and at the same time be manageable from a production technology point of view. This applied not only to the manufacture of the series-production tools, but also to the demoulding characteristics of the light module in the tool, as well as the manageability of the process in terms of strict absence of distortion. “The function of the light module demands that the component be completely distortion-free, which is a challenge for us as tool designers, and for production at Hella”, adds Friedrich Vosswinkel.

Below you will find optional additional modules

1. Functional principle of the “Edgelight”

2. Ways and methods of model making

The light is fed into the massive “Edgelight” (light module or light strip) from LEDs mounted on a circuit board using collimator optics. Using deflection optics within the “Edgelights”, the LED light rays are reflected into the preferred direction and then finally, using output coupling optics, emitted in the required beam direction.

The pre-conditions for such thick-walled optics made of PMMA (Altuglas HT 121 or Plexiglas 8N) are high precision optical surfaces with a very good surface quality with the lowest possible distortion in the part. The geometry of the PMMA light strip is designed in such a way that the light entering and exiting at both ends is as focussed as possible. The illumination effect of the rear lights is homogenous and bright.

2. Ways and methods of model making

There are two types of model making in product development: rapid prototyping and industrial prototyping. Rapid prototyping means: for the rear lights of the Porsche Macan, Hella needed prototypes from Robert Hofmann in order to test them and for consultation and approval from their customer Porsche. This highly dynamic consultation process required constant adaptation to design wishes and modified functional requirements. These prototype parts, which are equivalent to series-production parts, are developed using model making methods. Initially they are built as individual components, and later as rear lights built into pre-production cars.

The methods included pouring of the “Edgelight” light modules with PMMA, and CNC milling of the light entry and exit geometries in order to achieve continuous improvement of the light parameters. EMU samples were made for the complete rear light module component group, using STL technology (stereo lithography), laser sintering for plastics, aluminium processing and vaporising of the reflectors. In addition, vibration welding was used and testing materials supplied for the subsequent small batch.

With regards to small batch production, after the development and modelling phase, “Industrial Prototyping” comes into play. Porsche needs demonstration vehicles from pilot production runs for presentation at trade fairs or for dealer presentations. These vehicles correspond to production vehicles in terms of function, but some model parts are used in them. In total, Hofmann delivered 300 sets of rear lights (right and left) before start of production.

Will Pittsburgh be the location for two petrochemical plants? One bringing 10,000 jobs here?