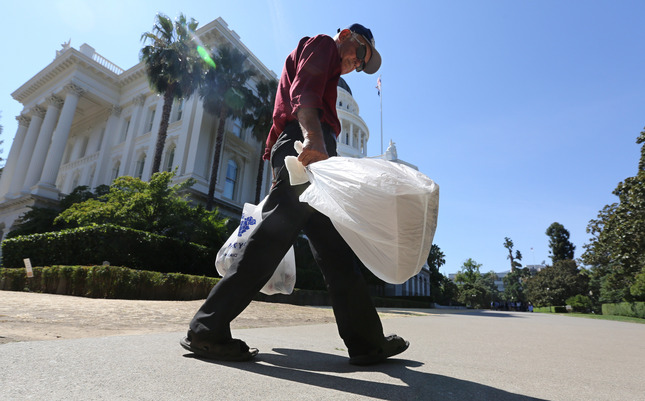 From The Oxo-biodegradable Plastics Association:

A Bill to ban plastic bags throughout California narrowly failed earlier this week when it was rejected on a 37-33 vote in the State Assembly, yet it could still be revived as the session does not conclude until Sunday.

The measure has engendered fierce lobbying, with protagonists for each side making it into a cause celebre. The OPA, which is an international not-for-profit organisation, has commented as follows:

Lightweight plastic bags are still the most inexpensive, convenient, and cost-effective way to take our groceries home and to protect them from contamination. A Life-cycle Assessment written by Intertek in 2011 put the environmental credentials of plastic shopping bags ahead of paper, jute, cotton, or compostable plastic.

This Bill (Senate Bill 270) seeks to deprive consumers of the benefits of lightweight plastic bags and this would impact hardest on large families on low-incomes.

The justification for the ban is that plastic shopping bags are often discarded into the outdoor environment where they lie or float around for decades, causing visual pollution and harming wildlife. This is a fact, though the contribution made by shopping bags (as distinct from packaging, fishing tackle, and other plastic products) is exaggerated.

In order to meet this challenge oxo-biodegradable plastic technology was invented and developed by distinguished polymer scientists in Britain, France, Sweden, Italy, Brazil and the USA.

It causes plastic to convert at the end of its useful life into biodegradable materials, which biodegrade in the outdoor environment in the same way as a leaf. Light and elevated temperatures are not necessary for the conversion process, but they will accelerate it. Nor is moisture necessary. This technology is not the same as “compostable” plastics.

The technology has been available in the USA for more than ten years, but the California legislature seems not to have been informed about it. Instead of taxing plastic bags they should require them to be made with oxo-biodegradable technology.

The technology is already in use by innovative companies in the US plastics industry, but lawmakers in California (and indeed the whole of the USA) are lagging behind countries in Africa, Asia and the Middle East which have already made it mandatory.

Oxo-biodegradation is officially defined by CEN (The European Standards Authority) as “degradation resulting from oxidative and cell-mediated phenomena, either simultaneously or successively”. It has been studied by scientists for many years, most recently at the Technical Research Institute of Sweden and the Swedish University of Agricultural Sciences, and a peer-reviewed report of the work was published in Vol 96 of the journal of Polymer Degradation & Stability (2011). They found 91% biodegradation within 24 months.

Oxo-bio plastic has the same strength and appearance as ordinary plastic and at little or no extra cost. It does not just fragment into small pieces. Once it has become biodegradable it is no longer a plastic, and it has to pass the tests in BS 8472 or ASTM D6954 to prove it is biodegradable and non-toxic and that it does not contain heavy metals. It does not therefore create microplastics.

Oxo-biodegradable plastic can be recycled if collected during the useful life of the product without the need for separation, though compostable plastic cannot.

The plastic particles which have been found in the ocean are fragments of conventional plastics. The problems they cause would be much reduced if they were oxo-biodegradable. Indeed, if all the plastic had been oxo-biodegradable, there would be no ocean garbage patches.

For further information, go to www.biodeg.org

Mood of the German Micro- and Nanotechnology Industry Significantly Brightens