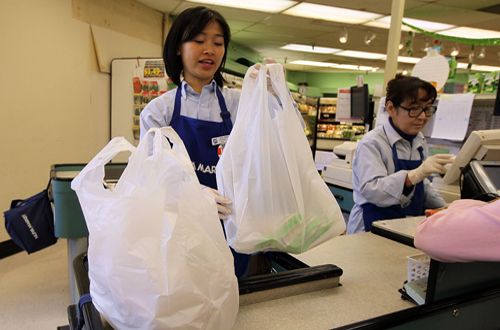 Two years after banning plastic shopping bags from grocery stores, the town of Huntington Beach, California demonstrated their overwhelming support for the bags when the city council voted to repeal the ban.

This follows, hard on the heels of Arizona’s state legislature1 who recently passed a law against plastic bag bans, which they said “are unjustified and unnecessary”.

It could be that the old adage is true “absence makes the heart grow fonder” but the decision was probably based on far more pragmatic reasons. Shopkeepers and consumers know that at the present time, there is simply nothing as cheap, flexible and useful as the plastic bag.

These bans are also misguided because there is no need to ban plastic products in the first place, as they can be made with a smart polymer, called oxo-biodegradable plastic. Shopping bags made with this type of plastic, will not be around for decades. Not only that but it they can be made with the existing workforce and machinery at little or no extra cost. The life of the plastic can be pre-determined at manufacture, typically 6 months for a bread bag and 18 months for a lightweight shopping bag.

The result is a plastic bag, without the environmental baggage associated with old-fashioned, conventional plastic. If the bag does escape collection and finds its way into the open environment, it will degrade into a non-toxic material, eventually being bio-assimilated by microorganisms in the same way as a leaf, only quicker, and leaving nothing behind. If collected, it can be recycled along with conventional plastic in a post-consumer waste scheme. If sent to landfill it will not generate methane.

Several countries have already embraced the technology that makes plastic smarter, and rather than banning plastic, which has consequences for the economy and public health, they have legislated to make oxo-biodegradable plastic mandatory.