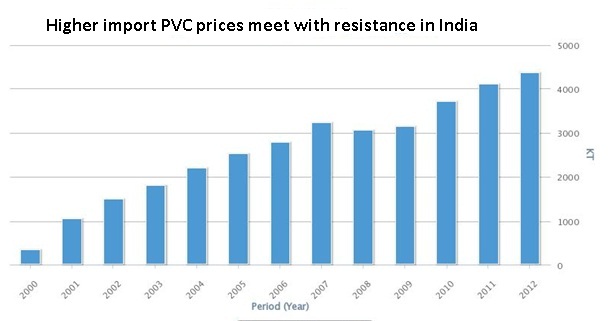 Initial import PVC prices for March have been announced with increases to India this week in accordance with rising upstream costs and the firming global trend, according to data from ChemOrbis Price Index. Buyers had been expecting to see more modest increases for the coming month and are offering resistance to the new prices. A major Taiwanese producer pioneered March price increases to Asia by announcing $70/ton hikes to China and $50/ton hikes to India. “Our new prices are meeting with resistance and we received bids from Indian buyers at levels $20-30/ton below our current prices. Nevertheless, we plan to maintain a firm stance on our prices and we believe that buyers will eventually accept our new prices,” a producer source reported.

A converter receiving new prices from the producer commented, “We have not made any purchases yet and we hear that not much material is being sold.” A trader based in Mumbai reported, “We received a $70/ton increase on the new offers we received for Taiwanese PVC. Our customers were not willing to accept these new levels so we elected to sell some more attractively-priced Chinese cargoes instead.” Another trader complained, “The new offers we received for March seem unworkable given the current state of the market. However, we are not very optimistic that sellers will be willing to give some discounts on their prices.”

A third trader told ChemOrbis, “Trading activity is slow at the new price levels as buyers generally find them too high to accept. Many buyers are shifting to the local market as they find local prices to be more competitive than imports these days.” A PVC pipe converter concurred, saying, “We received new offers for Chinese PVC at levels we found too high to accept. We are planning to meet our needs from the local market for now.” Another pipe manufacturer added, “We do not believe that any increases will prove workable in March as strong competition among distributors is keeping locally-held PVC prices from moving higher.”

View the Malvern Instruments toolkit for polyolefin characterization at SPE 2013

Author plasticsinfomart 187
“With customer satisfaction first, and safety a must, we maintain our thorough commitment to product quality in the customer experience, from the taste of...
Read More

Author plasticsinfomart 297
Crude oil dipped a little from its seven-month peak on Tuesday as investors locked in profits from previous gains. Contract price rose to a...
Read More