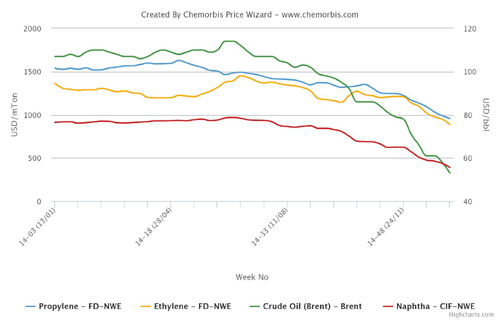 Players in Europe report that September PE deals are settling with decreases in excess of the ethylene contract drop while most players are anticipating further reductions for the coming month, albeit in smaller amounts than the September reductions as reported on www.ChemOrbis.com.

A distributor based in Germany reported concluding spot deals for two different West European origins with €200/ton declines from August. “We did not secure a large volume of material for September, but we still had to give price reductions in excess of the drop in the ethylene contract before concluding deals as sentiment is bearish and demand is limited,” the distributor stated.

Another distributor based in Germany said that they have sold most of their allocations for a West European origin after agreeing to additional €30-60/ton decreases from their initial September prices, bringing their cumulative monthly declines to €120-160/ton. “Demand had been better earlier in the month, but buyers are becoming increasingly cautious about purchasing as they anticipate further reductions in the coming month,” the distributor stated.

In the Netherlands, a distributor said that they concluded spot deals for a West European origin with €70-120/ton reductions from August. “We were able to sell HDPE film with relatively smaller reductions than other PE products due to limited supply for this product. Demand is limited for now as buyers generally anticipate further reductions in October,” the distributor stated.

As per ChemOrbis pricing service, an Italian converter in the packaging sector said that they concluded their gentlemen’s agreements for West European and South European LDPE film with €150/ton decreases from August. “We were able to secure price reductions beyond the fall in the ethylene contract this month. For October, we anticipate that deals will settle with rollovers or smaller reductions,” the buyer stated. Another Italian converter said that they purchased some localized Middle Eastern LDPE with a €120/ton reduction from last month. “We sourced only a limited volume of material this month as we anticipate further decreases in October, although we expect October declines to be smaller than the reductions we secured for September,” the buyer commented.