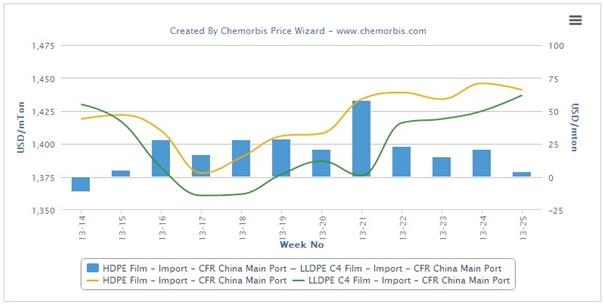 Meanwhile, LDPE film prices, which have been trading at a discount against both LLDPE and HDPE film over the past year, are starting to close the gap with other PE products and even managed to gain some premium over HDPE film prices this week.

According to data from ChemOrbis Price Index, import HDPE film prices on a CFR China basis have been trading with a premium relative to LLDPE film prices since the middle of April. Over the next eight weeks, the premium on HDPE film relative to LLDPE film fluctuated between $15-60/ton, reaching its peak towards the end of May. Since reaching a high of $60/ton, the premium for HDPE film has been gradually declining and currently stands at less than $5/ton.