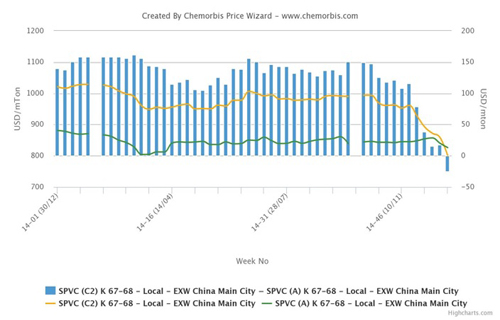 In Asia, the regional PVC markets have recently started to weaken in line with players’ earlier expectations of a downturn in the trend based on slowing demand, comfortable supplies as well as softening ethylene costs, according to ChemOrbis. This week, a major Taiwanese producer announced their June PVC prices  to China, Southeast Asia and India with reductions of $30-40/ton from their initial May offer levels. Some players even argue that the producer’s new levels may not see acceptance from buyers as thin demand is expected to exert further downward pressure on prices in the near term.

These bearish factors are apparently pushing Asian PVC sellers to look for alternative export destinations where they can divert their cargoes. Plunging freight rates are also helping them gain competitive power in export markets, particularly in Turkey.

Freight rates from Asia to Turkey have been steadily falling since the beginning of 2015 until this month and the overall decrease is around 85% over the period, according to freight rates tracked by ChemOrbis. The current freight rates as low as $15-18/ton paved the way for Asian offers to gain a competitive edge in Turkey this week.

Asian origins have been sporadically reported in the Turkish PVC market since the beginning of April after a long period of absence, according to ChemOrbis. However, offers for Chinese and Taiwanese origins were reported at quite competitive levels this week due to their lower freight rate advantage.

Yet, Turkish players are not rushing to secure these cargoes. This is because demand has been showing a quite lackluster performance while the approaching Ramadan and summer holidays may exacerbate it further, according to traders. A distributor commented, “The landed cost of these materials is quite low. However, it would still be too risky ahead of the summer lethargy.”