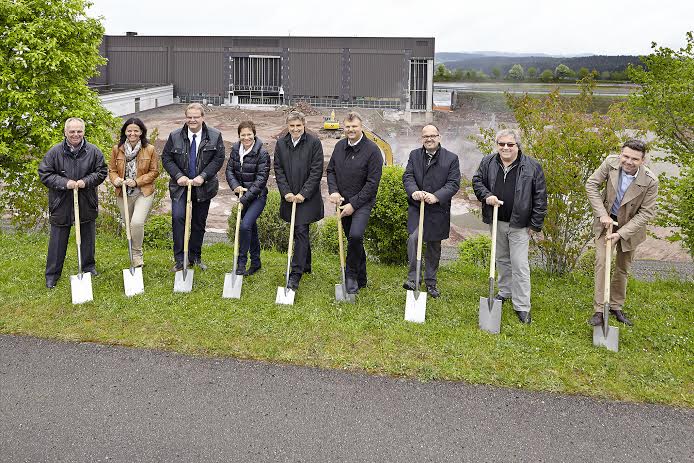 • New hall: Floorspace expanded by 18,600 m2 to a total of just under 165,000 m2
• More space: New building for assembly of large injection moulding machines and turnkey systems
• Commitment to the Lossburg location: Tens of millions of euros invested

Lossburg. On 28 April 2014, Arburg held the official ground-breaking ceremony for a new assembly hall in Lossburg, which will expand the central production location by 13 percent to just under 165,000 m2. Initial excavation work began in March 2014 and the completion date has been set for the autumn of 2015. With the new building section, Arburg is responding to the increasing demand for large injection moulding machines and complete production cells.

“Growth means preservation, means actively securing the future,” explains Michael Hehl, Managing Partner and Spokesperson for the Arburg Management Team at the start of his speech, adding: “The capital investment for the new building section, to the tune of many tens of millions of euros, demonstrates our clear commitment to Lossburg as a production location and is an indicator of the long-term, targeted strategy for which Arburg has been famous for decades and makes us a reliable partner.” Significantly more time and space is required for assembly and testing of the large injection moulding machines up to a clamping force of 5,000 kN and complete turnkey systems.

Modern facility management reduces energy requirements
During its construction activities, Arburg always focuses on functionality and aesthetics. Moreover, environmental protection and the conservation of resources and energy represent a permanent feature of Arburg’s corporate culture. “With the new building, we are implementing highly integrated facility management, which will reduce the primary energy requirements to a minimum and therefore further expands our environmental protection activities,” said Michael Hehl in this context.

The waste heat produced is utilised for heating the hall, for example. Collected rainwater is used by the gardeners and covers all the requirements for the sanitary facilities. Furthermore, its use as a buffer storage for the industrial cooling required in the building is a special feature. North-facing shed roofs reduce the thermal load and minimise the need for electric lighting. The natural cold of the ambient air is used for air conditioning purposes – e.g. via an ingenious facade design that employs natural ventilation instead of ventilation systems. Furthermore, extension of the photovoltaic plants to generate a further 340 kWp (kilowatt-peak) is also planned.

New hall ready for occupation by autumn 2015
The new two-storey building section with a floorspace of 18,600 m2 will increase the total area in Lossburg by some 13 percent to just under 165,000 m2. A few key figures illustrate the scale of the construction project: 22,000 m3 of earth are being excavated. A total of 8,000 m3 of in-situ concrete, 2,500 tonnes of reinforcing steel and 100 tonnes of pre-stressing steel are being used for the building. The glazed facade covers a surface of 3,800 m2. The new building will match the assembly hall built in 2000 as part of the ARBURG II plant expansion. At the time, Arburg was already thinking in forward-looking terms by employing a modular construction concept so that the new building section can be integrated into the existing building complex with relative ease.

About Arburg
German machine manufacturer Arburg is one of the world’s leading manufacturers of injection moulding machines with clamping forces between 125 and 5,000 kN. This is complemented by robotic systems, customer- and sector-specific turnkey solutions and further peripherals. An innovative additive manufacturing system developed in-house was added to the plastic processing range in 2013.

In keeping with its motto “Arburg for efficient injection moulding”, the company places the topic of production efficiency at the centre of all its activities, taking into account the entire value-added chain. The objective is to enable the Arburg customers to manufacture their plastic products, whether one-off parts or high-volume production, in optimal quality and at minimum unit costs – e.g. for the automotive and packaging industries, communication and entertainment electronics, medical technology, or the white goods sector.

An international sales and service network guarantees first-class, local customer support. Arburg is represented by its own organisations at 32 locations in 24 countries and by trading partners in more than 50 countries. The machines are produced exclusively at the parent factory in Lossburg, Germany. From a total of around 2,300 employees, around 1,900 work in Germany. About 400 further employees work in Arburg’s organisations around the world. In 2012, Arburg became one of the first companies to gain triple certification: to ISO 9001 (Quality), ISO 14001 (Environment) and ISO 50001 (Energy).

Further information about Arburg can be found at www.arburg.com.

ENGEL at PLASTPOL 2014 in Kielce

Author Plastics Infomart 332
At this year’s formnext in Frankfurt AM Solutions – 3D post processing technology is presenting not one but three trend setting machines. The new...
Read More