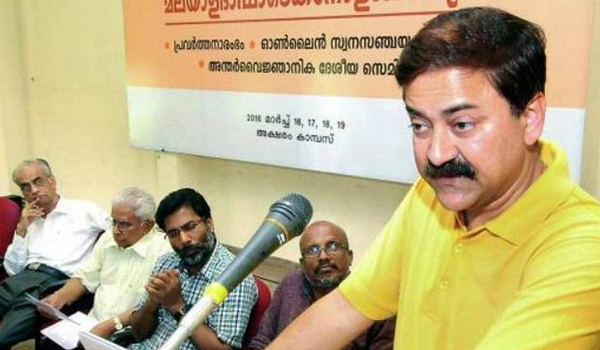 Those who have felt a little guilty every time they bought something in a plastic carry bag may have heaved a sigh of relief on hearing that the plastic they dumped as waste can be recycled and used for road construction. Perhaps, they were mistaken. There is an allegation that the whole story was cooked up for your benefit, to lighten your sense of guilt and encourage you to continue using plastic.

With increasing pressure to tackle the plastic waste menace, almost every local body had come up with one or the other means to recycle plastic. While the rather well-to-do local bodies had gone ahead with a full fledged plastic recycling units that converted it into pellets to be supplied to recycled products manufacturers, others had settled for plastic shredding units. They had claimed that the shredded plastic is used in tar for roadworks.

But, the sad truth is that many such shredding units turned dysfunctional within a year of their commissioning. “Many shredding units have become defunct. The initial plan was to sell the shredded plastic to Clean Kerala company which it would sell to contractors who undertook roadwork. But the local bodies soon stopped shredding as the Clean Kerala company did not make any effort to collect the shredded plastic,” said Jabir Karat, CEO of Green Worms, a waste management firm approved by Suchitwa Mission.

However, Babu Parambath, project coordinator of Niravu Vengeri that runs the Kozhikode Municipal Corporation’s plastic recycling unit, claimed that Kerala can make it work by establishing a proper link between the shredding units and the contractors. “The PWD or the Clean Kerala company are supposed to provide the link. But they have failed,” he said, claiming that shredded plastic from several units run by Niravu were sold outside Kerala and was in great demand.

A source at the Uralungal Labour Contractors’ Cooperative Society said plastic was not at all necessary for roadwork and that claims to the contrary were an eyewash. “We undertake roadworks and do not use plastic at any stage,” said an engineer. He said plastic was being used only for rural roads where the melting point of tar is set below 130 degree Celsius. For large-scale roadworks, the temperature is set above 160 degrees, which the plastic would not survive.

219930 435354I was curious if you ever considered changing the page layout of your site? Its very well written; I love what youve got to say. But maybe you could a little more in the way of content so people could connect with it better. Youve got an awful lot of text for only having 1 or two images. Maybe you could space it out better? 488988

907378 525533Fantastic beat ! I wish to apprentice even though you amend your website, how could i subscribe for a weblog internet site? The account aided me a acceptable deal. I had been slightly bit acquainted of this your broadcast provided bright clear idea 254031

201159 472448Hmm is anyone else having issues with the images on this weblog loading? Im trying to figure out if its a problem on my end or if it is the weblog. Any responses would be greatly appreciated. 795194

248772 168399This web site is often a walk-through like the information you wanted in regards to this and didnt know who to question. Glimpse here, and you will certainly discover it. 914104

Thank you, I’ve just been searching for information approximately this topic for ages and yours is the
best I have found out till now. But, what in regards
to the conclusion? Are you certain concerning the source?

I used to be able to find good advice from your content.

I will immediately grasp your rss feed as I can not find your email subscription hyperlink
or newsletter service. Do you’ve any? Kindly let me recognise
so that I could subscribe. Thanks.

I was curious if you ever thought of changing the page layout of your website?

Its very well written; I love what youve got to say.
But maybe you could a little more in the way of content so people could connect with it better.
Youve got an awful lot of text for only having 1 or
two images. Maybe you could space it out better?

Hi there, just became alert to your blog through Google,
and found that it’s truly informative. I am going
to watch out for brussels. I will be grateful if you continue this in future.
Many people will be benefited from your writing.
Cheers!

Very good blog post. I definitely appreciate this site.
Thanks!

Hello, just wanted to say, I liked this blog post.
It was inspiring. Keep on posting!

812475 704745Discovered your weblog and decided to have a study on it, not what I usually do, but this blog is great. Awesome to see a internet site thats not spammed, and actually makes some sense. Anyway, excellent write up. 296462

Great beat ! I would like to apprentice even as you amend your site,
how can i subscribe for a blog site? The account helped me a
applicable deal. I were tiny bit acquainted of this your broadcast provided shiny clear concept

Thank you for any other wonderful article. Where else may anybody get that type of info in such an ideal approach
of writing? I’ve a presentation next week, and
I’m on the look for such information.

Somebody necessarily assist to make critically articles I would state.
That is the very first time I frequented your website
page and up to now? I surprised with the research you made to create this particular submit incredible.

Everyone loves what you guys tend to be up too. This type of
clever work and coverage! Keep up the excellent works guys I’ve included you guys to my personal
blogroll.

I’m curious to find out what blog platform you are utilizing?
I’m experiencing some minor security issues with my latest website
and I’d like to find something more secure. Do you have any solutions?

Have you ever thought about including a little bit more than just your articles?
I mean, what you say is important and all. But just imagine if you added some great graphics or videos to give your posts more, “pop”!
Your content is excellent but with images and video clips, this site could undeniably be
one of the greatest in its niche. Fantastic blog!

I’m really enjoying the design and layout of your site.
It’s a very easy on the eyes which makes it much more enjoyable for me to come here and visit more often.
Did you hire out a developer to create your theme?
Excellent work!

Thank you, I’ve recently been looking for information approximately this subject for a
while and yours is the greatest I have discovered till
now. But, what concerning the bottom line? Are you certain in regards to the source?

Welcome To ExtraWinning – Asia 1st Gaming Site With The Most
Gaming Products. Experience The Best : Extrawinning mega888- The
Most Trusted Online Casi… …

Hello friends, how is everything, and what you want to say on the
topic of this paragraph, in my view its actually amazing in favor of me.