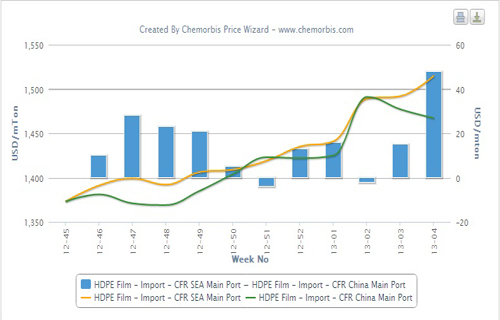 In Europe’s PET market, players report that offers on the low end of the PET price range are disappearing ahead of the higher expected MEG and PX contracts, according to ChemOrbis. Spot PET prices in Europe moved up by €10-50/ton during the past week. The greater part of the increase occurred at the low end of the range.

A distributor in Italy, who sold local PET with increases, said that overall demand is performing well while supply levels are not that adequate. “Given the current market dynamics, players are mostly accepting increased offer levels,” he added. A buyer, who purchased at the low end of the local range, commented, “We paid €60/ton increases on our May PET purchases when compared to the price we paid in April. Regarding supplies, we do not think that supply is that tight and we believe that the tightness is being exaggerated by sellers to keep the firming up trend in place. At the moment, we feel comfortable with our stock levels as we still have some cargoes set to arrive from Pakistan that we purchased back in April.”

In Italy’s import market, the number of offers continues to be very scarce mostly due to the weaker euro/dollar parity. This situation continues to lend support to sellers operating in the local market and gives them an upper hand in negotiations.

A buyer operating in Germany also confirmed that they received €50/ton increases from a Northwest European producer for May while adding that they have not received any import prices. “We believe that prices may record additional increases during the course of May and therefore, we are mulling over accepting the offers we have received,” he added.

A converter operating in Frankfurt also noted that they paid €50-60/ton hikes for May PET purchases. Given limited supplies, further hike expectations are pronounced for June. “We have started to see good end demand this month,” the buyer commented.

Apart from supply concerns, May PX and MEG contracts are expected to settle with increases as per ChemOrbis pricing service. Meanwhile, the most recent European spot PX prices are quoted around $50/ton firmer when compared to the beginning of May while they are $175/ton higher from early April levels.