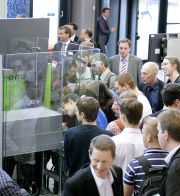 Fakuma is developing into one of the top plastics fairs worldwide. This became evident once again at the end of October in Friedrichshafen. Increases in trade fair contacts and sales compared with what was already a very good previous year translated to a huge success for ENGEL AUSTRIA at Fakuma 2012.

This was the first time that ENGEL had exhibited at two stands. Directly at the east entrance ENGEL presented a new, all-electric injection moulding machine series, the ENGEL e-mac. “Our motto of E-novation: Efficiency & Innovation once again caught the spirit in the plastics processing industry and helped us network with many new customers. The trend towards increasing internationalisation was again reinforced at Fakuma this year. While one third of all visitors to the ENGEL stand were from German-speaking countries, the percentage of international visitors, especially from eastern Europe and Scandinavia once again rose.

This makes Fakuma the undisputed number two in the plastics industry”, says Gerd Liebig, Global Marketing Director with ENGEL AUSTRIA, summing up. With ten highly integrated and automated production cells on its own trade fair stand, and on stands presented by partner companies, ENGEL demonstrated at Fakuma how innovative technologies and machine solutions help to leverage efficiency potentials to maximum effect. A high level of innovative force, combined with efficiency and economy, is the global key to improving competitiveness.

Compact design, powerful performance
One of the highlights was without a doubt the new ENGEL e mac injection moulding machine series, an all-electric and highly-precise machine that requires very little floor space and is extremely economical despite being fully modular. This was demonstrated by two sample applications. An ENGEL e-mac 50/50 with 50 tonne clamping force produced two-pin PBT plug housings in a 4-cavity mould in the East Foyer. Because the plug contacts are not pressed in until after injection moulding, the dimensional stability of the components is the deciding factor in economic production. The ENGEL e-mac 50/50 was equipped with a size 18 screw.

The shot weight for producing the plugs was a mere 3.6 grammes. In Hall A5, an ENGEL e-mac 310/100 with an integrated ENGEL viper 6 linear robot produced polypropylene and liquid silicone wine bottle stoppers. Thanks to UV vulcanisation, these two materials can now be processed in a single step. In cooperation with mould making partner Elmet, ENGEL’s low-temperature UV vulcanisation process paves the way for new multi-component technology applications.

Production of food containers with an integrated barrier layer was another crowd drawer. ENGEL has succeeded in combining barrier technology with thin-wall injection moulding thanks to co-injection of polypropylene and EVOH. The high-precision, all-electric ENGEL e-motion injection moulding machine provides maximum productivity with low energy consumption, while at the same time ensuring that the EVOH barrier layer of just 0.05 mm thickness is reliably implemented right to the edges.

On-going expansion in Germany
Both ENGEL trade fair stands saw a substantial stream of visitors throughout Fakuma. But this success is not just due to the fair’s high level of acceptance. “In the last few years we have continuously increased our market share, and no more so than in Germany”, revealed Gerd Liebig. To do justice to this growth, ENGEL is opening its fourth subsidiary for the German market near Stuttgart in January. Many customers from south west Germany visited Fakuma to discover how they can make more intensive, and above all local, use of ENGEL’s services in future.

Molecor becomes a member of Vinyl Plus