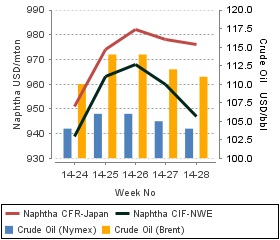 Energy markets have been on a weakening trend for the past ten days after having hit an 8-month-high both on the NYMEX and Brent exchanges as per the pricing service of ChemOrbis. Naphtha prices have also turned south recently following monthly gains of $35/ton in Europe and $41/ton in Asia on average.

In crude markets, futures on NYMEX hit a level as high as $107/bbl on June 20 before gradually losing ground by more than $4/bbl to trade around at $103/bbl currently. Brent crude also fell below $110/bbl, cancelling all the gains recorded in less than a month’s period after having touched above $115/bbl.Even though the climbing security concerns and a possible disruption of supplies in Iraq were the reasons pushing prices higher, they steadily eased down as it turned out that export supply from OPEC’s second-biggest oil producer has not been impacted noticeably from the turmoil.On top of the diminishing fears in Iraq, resolved supply issues in Libya also exerted downward pressure on crude oil prices. Libya has 7.5 million barrels of oil ready to export from the Es Sider and Ras Lanuf terminals after ending a force majeure, the country’s Oil Ministry said earlier in the week.When looking at the naphtha markets, they have also been responsive to the weaker energy markets for the past ten days. Unlike crude oil, naphtha markets have not erased all the gains recorded throughout June. Spot naphtha prices have retreated by around $10/ton so far in Asia whereas Europe has posted a relatively larger loss of $22/ton on average.According to ChemOrbis, naphtha supplies are considered comfortable in Asia while players anticipate the market will remain well-supplied due to the planned maintenance shutdowns for September and October at Asian steam crackers. Plus, an arbitrage window has been open from Europe to Asia, pointed out some traders, particularly from the Mediterranean region rather than Northwest Europe.

Author plasticsinfomart 88
The 42 percent, four-month rebound in rubber prices may be coming to an end as global tire demand plunges the most in three decades....
Read More

A Strong Performance for Plastics Machinery Shipments in Q3