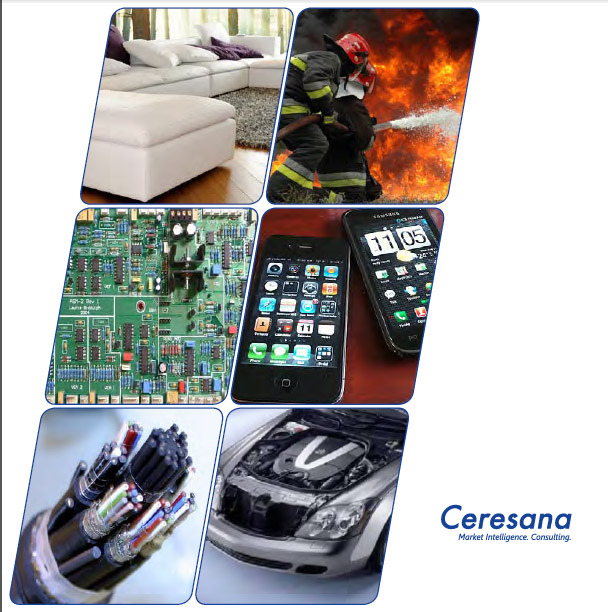 Flame retardants can save lives: They prevent or at least slow down the combustion of plastics, construction materials, and textiles. Fire protection in car seats or the interior of ships would be impossible without them. The increase of demand for plastics on the part of the construction, automotive and electronics industries in particular is causing consumption of flame retardants to rise. According to the study recently published by the market research institute Ceresana, more than 2 million tonnes of flame retardants were consumed in 2013. Ceresana forecasts market value of the important additives to amount to approx. US$7.15 billion in 2021.

It is mainly the construction sector that consumes flame retardants: Flammable materials are used in thermal insulation and in improving energy efficiency in residential buildings and pipes and cables made from plastics increasingly replace conventional pipes made from metal – as a result, fire protection has to be improved as well. Demand in the segment electrics & electronics is increasing even more dynamically: Manufacturers of smartphones and tablet computers are consuming more and more flame retardant plastics. They also are increasingly concerned with environmental and health safety of the flame retardants used.

Phosphor Rather Than Bromine

Demand for flame retardants based on phosphor in particular is rising much more dynamically than was expected a few years ago: “Sales volume of organophosphorous products increases at an AAGR of 5%, which is the by far highest growth rate”, Oliver Kutsch, CEO of Ceresana, summarizes the analyses. “The second largest growth market is antimony oxide. Aluminum trihydroxide, or, in short, ATH, remains the most important type of flame retardant nevertheless.” Regional differences are considerable: While halogenated flame retardants are still dominating the Chinese market, ATH compounds are accounting for about half of total market volume in Western Europe and North America.

Asia-Pacific is the worldwide largest sales market for flame retardants, with China single-handedly consuming almost one quarter of total production. North America still is the second largest consumer, followed by Western Europe, even though the American construction industry in particular suffered losses in the past years. Driven by China and India, Asia-Pacific is likely to gain market shares. The Middle East and South America are dynamic growth markets as well; absolute figures, however, still are comparatively low.

The Study in Brief:

Chapter 1 concisely summarizes the most important facts about various types of flame retardants. Demand is analyzed split by type of flame retardant: ATH, brominated, chlorinated, organophosphor, antimony compounds, and other flame retardants.Chapter 2 offers an overview and analysis of the global market for flame retardants, including forecasts up to 2021: Total demand, total revenues, and demand for each product are examined in detail.

Author plasticsinfomart 104
Adam Lowry, co-founder of US-based hygiene products company Method Products Inc, revealed in his blog on www.treehugger.com that his company has, in partnership with...
Read More