Covestro announced that it is testing an environmentally friendly process for recycling saline process wastewater in plastics production.

A pilot plant for the process, which reduces the salt levels in waters such as the Rhine and conserves potable water resources, was opened at the Krefeld-Uerdingen site in Germany on January 29. It is being used in the production of polycarbonate (PC). 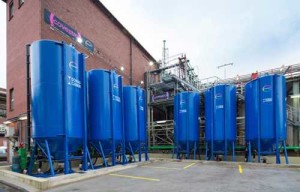 Covestro initiates pilot test to use wastewater in plastics production

Markus Steilemann, Head of Innovation at Covestro, said at the opening ceremony, “The generous support from the federal government encourages us to remain diligent in our efforts to develop sustainable technologies and products.”

The German Federal Ministry for the Environment has provided some €740,000 in funding to support the project. The total cost of investment is around €3.7 million.

The current project at Covestro marks the first time in Germany that saline industrial wastewater has been recycled at an industrial pilot plant. Pretreated salt water such as this is usually released into waterways, specifically the Rhine, which runs directly along the site.

With the new process, the company said some of this wastewater can now be used in an electrolysis process to manufacture chlorine, which is one of the key materials for producing polycarbonate and other plastics.

In addition, the process also stops up to 70 cubic meters of saline wastewater from being released into the Rhine every hour, thereby protecting a similar quantity of potable water resources.