Disposable shopping bags, water bottles, drinking straws, and to-go boxes—those are just some of the kinds of plastic litter that can be found on sidewalks or washed up on beaches around the world. But how tough would it be to give up single-use plastic items in all forms, from takeaway coffee cups to disposable utensils? 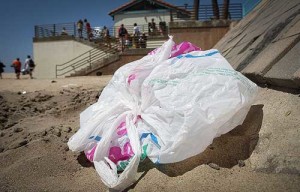 Cities Are Looking Past Bag Bans to the Plastic-Free Future

Folks who participate in Plastic Free July, a challenge that seeks to raise awareness of and reduce the amount of plastic in our lives, can find out.

The challenge, which was started by government officials in Perth, Australia, in 2011, has spread to 90 countries this year. It asks people to refuse single-use plastic throughout the month of July. That “includes plastic shopping bags, plastic cups, straws, plastic packaging…basically anything that’s intended only to be used once and then discarded,” according to the challenge’s website. If that sounds too daunting, Plastic Free July asks the public to ditch four of the most common plastic items: disposable bags, bottles, coffee cups, and drinking straws.

Although doing so might sound difficult, “there are some really simple ways to cut down on plastic,” wrote campaign cocreator Rebecca Prince-Ruiz on the website. “This includes using reusable containers, saying no to straws, and carrying reusable shopping bags. It is important to remember that this is a challenge, not a competition. There is some plastic packaging you simply can’t avoid.”

Participants are encouraged to collect all unavoidable single-use plastic, keep it in a bag, and share it on social media at the end of the month. They are also encouraged to reuse the plastic items they have—do you really need to chuck a disposable plastic fork?—whenever possible.

The need for the challenge is there. Each day in the United States, 50 million plastic water bottles are thrown away instead of recycled. If laid end to end, the trail would stretch from San Francisco to New York and back. The average person in North America or Europe uses about 220 pounds of disposable plastic per year.

Some of that ends up sitting in landfills, where it can take 450 to 1,000 years to decompose. Those items that don’t often float through the world’s marine ecosystems. Every year plastic waste causes approximately $13 billion in destruction to the world’s beaches, according to the United Nations Environment Programme, and by 2050, it’s estimated there will be more plastic than fish in the oceans.

While recycling is a step in the right direction, the Plastic Free July organizers wrote on the website that doing so will never be able to account for the world’s expanding plastic consumption. Along with cutting out the material entirely for one month, the challenge also recommends making small, permanent lifestyle changes to reduce plastic waste over time. Suggestions include bringing reusable shopping bags to the grocery store and opting for reusable alternatives to disposable plastic water bottles when hitting the gym.

The organizers also recommend that people pick up plastic litter and stop purchasing produce or other grocery items that are over-packaged, such as bananas resting in a polystyrene tray or wrapped in plastic wrap.