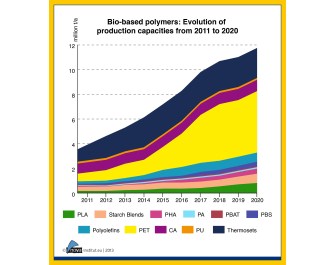 The most dynamic development is foreseen for drop-in biopolymers, which are chemically identical to their petrochemical counterparts but at least partially derived from biomass. This group is spearheaded by partly bio-based PET (Bio-PET) whose production capacity will reach about 5 million tons by the year 2020, using bioethanol from sugar cane.

The second in this group are bio-based polyolefins like PE and PP, also based on bioethanol. But “new in the market” bio-based polymers PLA and PHA are also expected to at least quadruple the capacity between 2011 and 2020, according to nova-Institute.

Most investment in new bio-based polymer capacities will take place in Asia and South America because of better access to feedstock and a favorable political framework. However, world market shares are not expected to shift dramatically. Europe’s share is expected to decrease from 20% to 14% and North America’s share from 15% to 13%, whereas Asia’s will increase from 52% to 55% and South America’s from 13% to 18%.

“For the very first time we have robust market data about worldwide production capacity of all bio-based polymers. This is considerably higher than in previous studies, which did not cover all polymers and producers.” Michael Carus, Managing Director of nova-Institute, comments. “The forecast of a total capacity of 12 million tons by 2020 – a tripling of 2011 levels – suggests that bio-based polymers are definitely polymers for the future.”