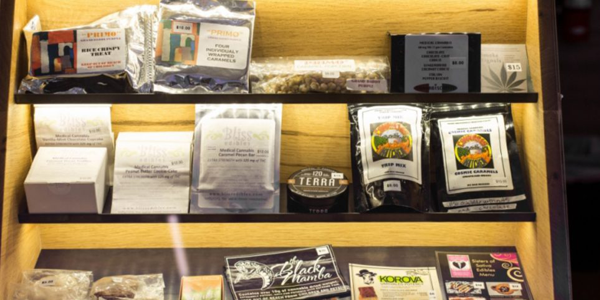 When cannabis became legal in Canada last Wednesday, many happy shoppers stocked up. They were less thrilled, however, when they discovered how much packaging came along with their marijuana.

Greg MacLean, who purchased four grams at the Nova Scotia Liquor Corporation last week, described what he got: two plastic containers, two cardboard boxes, and clear plastic casing, all enclosed in a brown paper bag. He told the National Post,

“My initial reaction was a bit of shock that such little amount of plant matter came with so much packaging. I’m a medical user of marijuana as well, and I’ve been buying from different dispensaries online from certified providers, and nothing comes like that. Like, ever. Crazy. It’s unneeded.”

Candace MacDonald bought 5.5 grams in several strains, each of which came in a separate plastic container. Out of curiosity she weighed one of the containers and found that it “outweighed the product by nearly 40 times — 38 grams of packaging for one gram of weed.” She said, “There’s one itty-bitty bud in it, and I could probably pack half an ounce in there.” Because of this, she said it is unlikely she’ll try different strains of cannabis, but will stick with buying in bulk to avoid the packaging.

Health Canada has stated that cannabis packaging must be tamper-proof, child-resistant, and safe from contamination, but it does not mandate the kind of packaging that must be used. That’s left up to provinces and licensed producers to figure out. Edwin Jewell, president of Canada’s Island Garden, which provides legal cannabis to Prince Edward Island and Nova Scotia, defended Health Canada’s requirements:

“The standards for us are set higher than that. We have to have child proof caps, it’s bulky, it adds cost, and adds packaging, but to Health Canada’s point, they’re trying to set the bar fairly high at the start to make sure things go well, and I understand that.”

The mandatory warning signs are supposed to have specific dimensions, which is why packaging is made larger to accommodate, but Allan Rewak of the Cannabis Council of Canada admitted that much of this information could be included in a paper insert in the future.

“This is something that we are going to have to look at in time, particularly as sales continue to increase because we don’t want this to be a contributor to the degradation of our environment — in fact we’d like it to be the opposite.”

He has fallen for the old, feel-good myth of recycling, unfortunately, because he reassured shoppers that “the good news is most of the product packaging is recyclable.” Unfortunately, just because something is recyclable does not mean it gets recycled. In fact, most of the time it does not, and if it’s plastic, it will simply get downcycled until it’s trash anyways.

Others point out the inconsistencies in requiring such serious packaging for cannabis, while bottles of alcohol do not require child-proof lids. In MacLean’s words, “A bottle of vodka would kill a child.”

Child safety is a reasonable concern, but there are many things in a household that can hurt a child. Thanks to parental supervision and common sense, usually they do not. Cleaning chemicals, alcohol, knives, and matches, among other things, are stored in places where kids can’t access them, and it stands to reason that adults would do the same with a cannabis stash. To assume that everything has to be plastic-clad to keep it safe only outsources the harm elsewhere — to the planet, where it does harm of another kind, contaminating waterways, landscapes, and bodies.

While the situation is far from being resolved, it is refreshing to see buyers’ frustration reaching national headlines. It shows that people are fed up with manufacturers not thinking about the entire life cycle of packaging, leaving it up to shoppers to sort and ultimately pay for in the form of municipal taxes. The more outrage, the more change we can expect to see in the future.

Or maybe just start growing it at home…