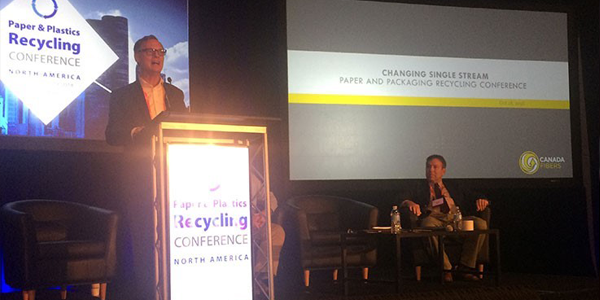 China’s policy to ban imports of postconsumer scrap plastics has upended markets for some of this material—namely film and mixed plastics—in the United States. Two recyclers shared why they have invested in technology to recover and recycle these materials during the session Investments in Domestic Plastic Processing at the 2018 Paper & Plastics Recycling Conference in Chicago in mid-October.

Houston-based Avangard Innovative Vice President of Commercial Business David Hudson outlined the case for investing in plastics recycling in the U.S., saying the country has a “severe lack of postconsumer processing capacity,” despite the fact that brand owners are interested in closing the loop for their packaging materials. The company added recycled low-density polyethylene (LDPE) pellet production in 2017, investing $10 million to build a manufacturing facility to convert the LDPE film packaging scrap it was already handling for its customers into postconsumer resin (PCR) to be used in in film production. While Hudson said Avangard’s move was not initiated in response to policies out of China, trade concerns with that country favor more domestic processing capacity for recycled plastics.

He said Avangard seeks a lack of consistency in terms of its infeed material and the varying film structures represented, adding that it was “more akin to polymer soup.” Throughput also can be an issue because of film’s light density. The company must deal with contamination in the form of paper, metals and other plastics, which has increased processing costs, he said.

Despite the challenges, Avangard has successfully produced PCR LDPE pellets for use in film applications ranging from garbage bags to nonfood packaging, Hudson said. Lumber and lawn edging also are popular end markets. He added that the company has noticed increased interest from higher end applications as well.

Avangard’s PCR LDPE pellets are sold within the U.S. as well as into Latin America, Southeast Asia and China.“PCR doesn’t always look just like virgin, though a lot of the performance attributes may be the same,” Hudson said.

Alex Bearnson, president of Revolve Recycling, Logan, Utah, described the evolution of his company from a brokerage firm to a material recovery facility (MRF) that plans to further process the glut of Nos. 3-7 plastics available in the market and eventually add technology to create recycled plastic pellets.

Bearnson said that while Revolve was building its MRF, “the world started falling apart, especially with plastics.” He was referencing changes to China’s scrap import policies that were introduced in 2017 that made it difficult to move certain MRF recovered materials.

“Ninety-three percent of our plastics were being sold to China,” he said. “We had not developed domestic markets.”

After analyzing the numbers, Bearnson said his company was “making our margins and money in plastics,” so Revolve decided to focus on “what we were good at.”

He said Revolve has created a system design and layout to sort substantially more plastic once it is up and running. (Installation was set to begin later in October.)

The 2018 Paper & Plastics Recycling Conference was Oct. 17-19 in Chicago at the Marriott Chicago Downtown Magnificent Mile. The 2019 event will be Oct. 23-25 at the same venue.