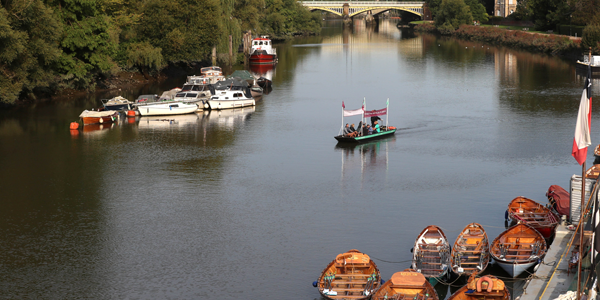 LONDON (Reuters) – Environmental campaigners launched a boat on the River Thames on Thursday made almost entirely of recycled plastic waste, in an effort to raise awareness of growing levels of rubbish in Britain’s waterways.

The 12-seater punt was built by Mark Edwards, who also made the Gloriana barge for Queen Elizabeth’s 2012 diamond jubilee.

Named the “PET Project,” the boat will run regular trips along the river to fish out plastic rubbish, which in turn will be used to build more such vessels.

“We went back to the technology inherited from the Vikings,” he told reporters at the launch in Richmond, southwest London.

“It took us two men, about six weeks flat out, so it’s quite a lot of work … but for a craft that’s going to last 100 years it’s nothing.”

Each year 300 tonnes of rubbish is cleared from the Thames and a large proportion of it is food and drink packaging that comes from dry land, says the environmental charity Hubbub which is behind the project.

It adds on its website: “Much of the litter is being eaten by birds, fish and other species which is leading to 70 percent of Thames fish found to have plastic in their gut.”

“I think this … shows that plastic is not just an issue that’s in far away oceans – it’s present here in London and actually there’s lots we can all do about it,” said its director Gavin Ellis.

“It’s about making sure you don’t put litter in an overflowing bin where it can blow out into the river and it’s obviously about not dropping litter directly into the river.”