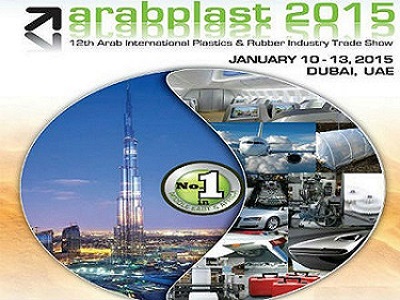 The biennial event, to be held from January 10 to 13, 2015, at Dubai World Trade Centre, to attract 18 country pavilions

Dubai, UAE, xx September 2014: ArabPlast 2015, the region’s largest trade show for plastics, rubber and petrochemicals, has confirmed the participation of 1100 exhibitors from 45 countries, three months ahead of the biennial event that will span nine halls in Dubai World Trade Centre. The event will feature 18 country pavilions, the largest of which will be that of Saudi Arabia.

For the first time in ArabPlast history, a UAE firm ‘Borouge’ is taking a lead by supporting the event as Principal Sponsor. Other Sponsors include TASNEE and NATPET. The 2015 edition of ArabPlast has been billed as one of the fastest growing trade shows in any sector in the Middle East, with projections of attracting 34,000 trade visitors from 111 countries.

Al Fajer Information and Services, co-organisers of the show along with German exhibition organiser Messe Dusseldorf, announced that new products in plastics and petrochemicals industries will be launched by several industry leaders at the three-day show. Also, world class facilities for international visitors will be offered, including e-service platform for all bookings.

“Top notch companies are gearing up for participation in ArabPlast that will be held from January 10 to 13, 2015,” said Jeen Joshua, Group Project Manager, Al Fajer Information and Services. “We invite all industry players to visit and get insights into newest advancements in plastics, petrochemicals and other relevant industries, including machineries and solutions.”

ArabPlast 2015 is among the largest machinery selling shows in Middle East, with over 150 containers of machines will be brought in from across the world for sale during the show.

Joshua added: “Among the highlights will be the presence of the biggest Indian pavilion since the launch of the show. The scale of participations demonstrates the rising status of ArabPlast on the global plastics and petrochemicals scene.”

“The GCC is truly the center of gravity for the Gulf petrochemical industry, with huge local and external investments and global major players partnering with local companies projecting to increase the share of GCC region in the production of petrochemicals.”

Rising demand from Asia and increasing European appetite for Middle Eastern products are also helping absorb the surge in production of plastics and petrochemicals by fast-expanding GCC manufacturers.

“The petrochemical industry is a major contributor to the GCC economies. The Gulf is the leading export hub of plastics raw material to the world, thanks to companies from the UAE, Qatar, Oman, Kuwait and KSA. Leading petrochemical companies in the Gulf do not depend on the Middle East market because they export to more than 150 countries worldwide. No wonder Saudi Pavilion is the biggest Pavilion in the entire Arabplast”

Joshua added that companies are aggressively competing to showcase their latest technology in plastic manufacturing at the exhibition. This is expected to give further boost to the demand for industrial machinery.

Joshua added: “The growth of this show reflects the high global demand for plastics and its raw materials and of course the machines. ArabPlast 2015 is registering a dramatic increase in the number of exhibitors, sponsors and display space.”

A record number of companies are participating in ArabPlast 2015, a reflection on the growing importance attached by GCC countries to strengthening their manufacturing industries, including plastics and rubber sector, which are known to be more sustainable investments in the long run.