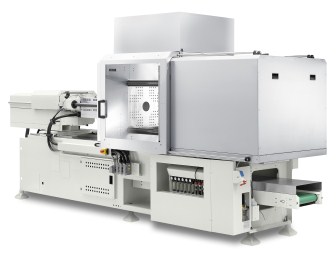 Arburg will demonstrate the production of medical components for use in analysis and diagnostics at the forthcoming Medtec Europe, to be held in Stuttgart, Germany from February 26-28.

An electric Allrounder 370 A with a clamping force of 600kN and size 70 injection unit will operate with a two-cavity mold from z-microsystems, a specialist in the production of prototypes in the development phase, through to small- and large-scale production.

The stainless steel exhibit is GMP-compliant and is equipped with a clean air module, making it ideal for use in the medical technology sector, says Arburg. The clean room elements from Ionstatex indicate the system’s suitability for production under clean room conditions.

So-called bottom layers for a lab-on-chip application will be produced as demonstration parts. The lab-on-a-chip will be completed with a top layer containing its own microchip for transporting liquids and displaying results. In the case of the polycarbonate (PC) bottom layer presented at the Medtec, the part weight is 3.264g with a shot weight of 7.98g and a cycle time of 24s.

As the dimensions of the lab-on-a-chip analysis units become smaller, it is generally predicted that microfluidics will play a major role in future medical technology, according to Arburg.