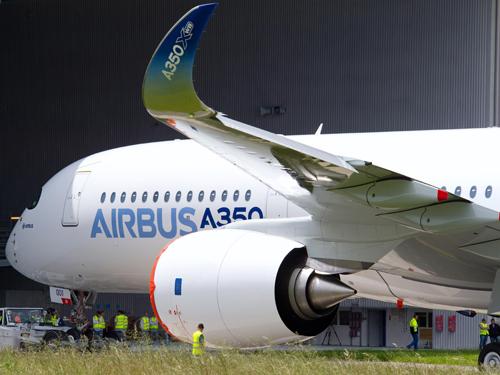 Airbus’s fanfare a few weeks ago when the first completed A350 XWB widebody jetliner came out of the paint shop was mostly a PR event. At the time, the two things the company announced were that the plane had received its final paint job, and ground tests were about to begin, with flight tests expected some time this summer. This gave us an excuse to check up on the progress of this record-breaking aircraft’s production.

The A350 XWB’s airframe consists of a bigger proportion of carbon-fiber-reinforced composite structures than any other commercial jet to date: over 53 percent by weight. Carbon fiber composite leader Hexcel is supplying all of the carbon-fiber composites, both prepreg and fibers, used in the plane’s primary structures. According to a video made by the company, these include fuselage panels and barrel, wing upper and lower covers, wing spars, center wing box, keel beam, main landing gear door and bay, and the vertical and horizontal tail plane.

But composites are not the only materials story for the aircraft. Titanium and advanced aluminum alloys combine with carbon composites to achieve more than 70 percent of the A350 XWB airframe’s weight in non-traditional materials. This plus a new aerodynamic design are aimed at reducing fuel consumption and operating costs by 25 percent compared to other aircraft in the same category of midsized, widebody, twin-aisle passenger jetliners.

This plane has a couple of possible advantages over the problems encountered by its composites-heavy predecessors, the Airbus A380 and Boeing’s problem-child 787. In the first case, the advantage is experience: Airbus’s chief executive Tom Enders admitted at a press briefing last year that the A380’s cracked wings were due in part to not understanding carbon fiber materials and their interface with metals, and not realizing this lack of understanding, as well as a lack of the right design controls. That admission impressed me: Boeing has tended to avoid such public mea culpas.

In the second case, the advantage is also experience, but here it has to do with battery choice. Boeing’s much-publicized problems with lithium-ion main batteries led Airbus to promptly conclude that it should abandon its own plan for Li-Ions and switch to proven nickel cadmium main batteries. I conclude that Airbus will probably learn from its own mistakes and the mistakes of its main rival.

Here are some highlights from the evolution of the plane’s construction, including its use of composites, from the most recent events back to the project’s earlier days. Click on the photo to begin the slideshow.