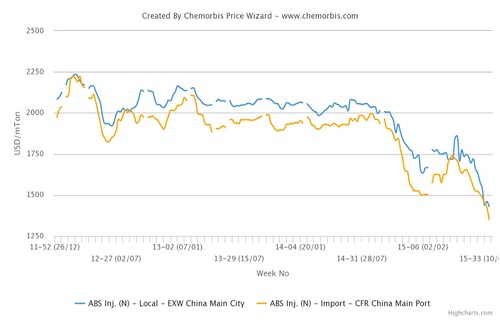 The downward trend in China’s ABS market gained speed this week, weighed down by the sharp decreases in feedstock costs and persistently sluggish demand. After posting larger decreases from a week earlier, ABS prices both in the import and local markets have hit the lowest levels since ChemOrbis began keeping records in 2012.

Despite firming up by $45/ton week over week on August 28 due to volatile crude, spot styrene prices on an FOB South Korea basis are still representing a decrease of around $185/ton compared to the beginning of August. In addition, both spot ACN and butadiene prices on a CFR China basis lost ground over the past week.

An agent of a Taiwanese producer commented that demand is weak as lower feedstock costs are pushing buyers to the sidelines. However, the seller expects to see improved demand in September ahead of the Christmas holidays. Another trader added, “Trading activities remain slow despite the recent gains in styrene prices. Sellers are giving discounts to attract buying interest, but buyers are still taking a wait and see stance. Few done deals are reported.”

According to ChemOrbis, in the local market, ABS prices are stable to CNY350/ton ($55/ton) softer week over week. A distributor reported that buyers are not interested in securing large volumes for now in anticipation of further decreases. Another distributor commented, “Demand is weak and supply is regular. We feel that most traders are keeping low inventories due to the prevailing downward trend. ABS prices might stabilize if the recent gains in crude oil prices prove to be sustainable. Otherwise, the outlook is bearish for now.”