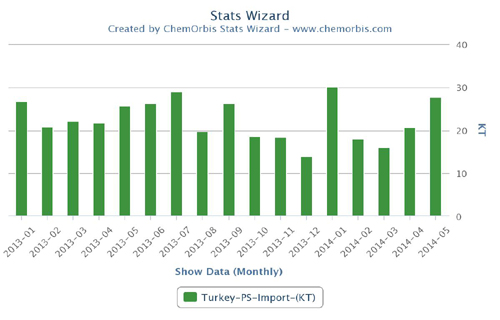 In China and Southeast Asia, the spread between import ABS and HIPS prices narrowed further over the past weeks in the face of the relatively larger price reductions recorded in the ABS markets as per www.ChemOrbis.com. As a result of the shrinking price gap, players in Asia highlight that several converters are considering switching to ABS instead of HIPS nowadays.

According to data from ChemOrbis Price Index, the gap between import ABS and HIPS prices on a CFR China basis posted a decrease of around US$283/ton compared to the beginning of March, when ABS prices carried the largest premium over HIPS recorded in the last year.

A source from a Taiwanese producer commented, “GPPS prices remained stable this week while HIPS prices witnessed some downward adjustments as they face pressure from import ABS prices, which continued to follow a softening trend.

”In Southeast Asia, a similar situation was observed. Data from ChemOrbis Price Index showed that the gap between import ABS and HIPS prices on a weekly average basis shrank by around US$95-100/ton when compared to late September to stand at US$50/ton last week. In January, import ABS prices were carrying a premium of around US$395/ton over HIPS prices, according to ChemOrbis data. A source from a Southeast Asian producer commented, “We are more willing to give discounts for HIPS than GPPS as the narrowing gap between ABS and HIPS is exerting pressure on our HIPS business.”