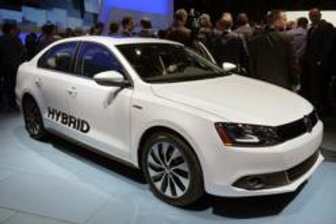 The 2013 Jetta Hybrid will hit Chapman Volkswagen Tucson’s showroom floors in the fall. Jetta Hybrid is different from the already available Jetta diesel as it will use a gas-electric system.

The new Jetta will be powered by a turbocharged 1.4-liter four-cylinder engine that makes 150 horsepower, an electric motor that produces 27 horsepower and a DSG seven-speed automated manual transmission. Together, the electric motor and gasoline engine make 170 horsepower.

Volkswagen predicts it will get 45 mpg combined. The 1.1-kWh battery pack powers the electric motor that can be found behind the rear seat. The entire unit is fan cooled and weighs 80 pounds. Similar to the gas-electric Volkswagen Touareg, the Jetta’s hybrid system uses the clutch to decouple the gas engine from the drivetrain. The system shuts off the engine and the car functions solely on electricity at speeds up to 84 mph.

According to the release, the model is the quickest hybrid in the class, with a 0-60 speed of less than nine seconds. With a curb weight of less than 3310 pounds, the acceleration speeds are comparable to the gas-powered Volkswagen Jetta. Besides, the cabin should be much quieter to the manufacturer’s standard due to the new exhaust system and upgraded acoustic glass for the windshields.

A quarter century of passenger safety

China’s polymer markets enter the holidays on a firm note

Author plasticsinfomart 90
When plastic ends up in the ocean, it becomes problematic to the ecosystem. To raise public awareness around this issue, Electrolux launched the Vac...
Read More

Author plasticsinfomart 120
LyondellBasell  has kept in place its declaration of force majeure on supplies of polypropylene (PP) from the company’s 210,000 tonne/year plant at Carrington, UK,...
Read More