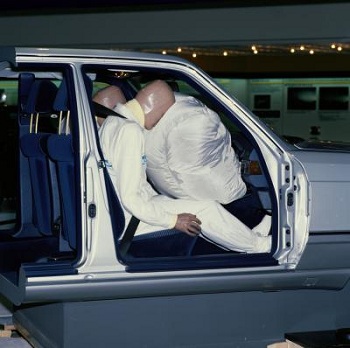 Around 25 years ago, Mercedes-Benz (Stuttgart) was the first automobile manufacturer in the world to introduce the front passenger airbag in a series-production car. The technology debuted in the S-Class at the Frankfurt International Motor Show in September 1987. It elevated the safety standards in Mercedes-Benz passenger cars to a new level and thus represented yet another logical step by the pioneer in passive vehicle safety in a long line of innovations.

Mercedes-Benz had already introduced the world’s first fully operational driver airbag in a production vehicle in 1981 – also in a 126 model series S-Class. The Supplemental Restraint System (SRS), consisting of driver airbag and belt tensioner, was available as an option costing DM1525.50. It was the result of the rigorous work undertaken by corporate research that had started in the mid-1960s.

When sensors detect a collision, a propellant charge is ignited and within a few milliseconds the nitrogen produced by this process inflates a bag made out of a special woven material. The resulting cushion protects people against impacting the dashboard. While the driver airbag is housed in the steering wheel, the front passenger airbag in its early manifestations occupied the spot where the glove compartment would normally have been. Thanks to refined and smaller airbag modules vehicles later regained the glove compartment. A key component of the system was the plastic skin or covering that had to be pierced or otherwise negotiated by the airbag during a collision in order for deployment to occur.

The front passenger airbag introduced in 1987 utilized the same technology as the driver protection system. It went on sale as an option on S-Class saloons and coupés in February 1988.

As early as 1994 the front passenger airbag became standard on all Mercedes-Benz passenger cars; the driver airbag had already been part of the standard equipment of all passenger car models since 1992. To further improve the protective effect afforded by airbags, the Mercedes-Benz engineers went on to develop additional systems such as the side airbag and the side curtain airbag in the years that followed.

The development of the airbag was in part driven by plans in the United States to prescribe an automatic occupant protection system for all cars from 1969. Airbags that inflate during an accident were seen as a very promising technology. The principle had already been patented in the 1950s. The principal pioneers were the German Walter Linderer (Patent DE 896312 of 6 October 1951) and the American John W. Hedrik (U.S. Patent 2649311 of 18 August 1953).

But it was a rocky road from the concept to production-ready technology. Particularly the necessary sensor systems and gas generation continued to present major challenges to the developers. This was evident in the solutions from American manufacturers, which equipped their first test fleets with compressed-air operated airbags as an alternative to seat belts: this concept led to serious injuries and in a few cases even fatalities.

For this reason the engineers at Mercedes-Benz chose a different approach to arrive at the “inflatable container in a folded state, which automatically inflates in the event of danger” (Linderer’s description of his invention in the patent application): the airbag was not to replace the restraining effect of the seat belt, rather it was to supplement it. Tests showed that the airbag only achieved maximum effectiveness in combination with the safety belt. In addition, the gas was not stored under high pressure, but generated on demand by igniting a propellant charge (at the time consisting of sodium azide, potassium nitrate, and sand).

The airbags for driver and front passenger quickly caught on in the entire industry as a life-saving technology. As airbag modules downsized, it was possible to incorporate them in other areas of a vehicle to also provide comprehensive protection in the event of a side impact: in 1993, Mercedes-Benz presented a study of a side airbag; in 1995 the side airbag became available as an option, initially in the E-Class. Further innovative steps were the side curtain airbag, the head-thorax sidebag and adaptive airbags that operate in different stages depending on the expected severity of the accident and provide optimal protection for the occupants

Axens, Total and IFPEN launch Atol™, an Innovative Technology for Bio-Ethylene Production Through Dehydration of Bio-Ethanol