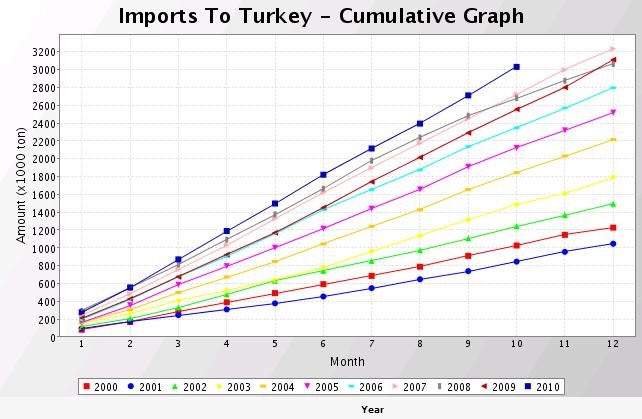 Turkey’s local PS market remains on a strong note with sellers adopting firm pricing strategies despite unsupportive demand in the post-holiday period, as per the pricing service of ChemOrbis. The market activity hasn’t picked up so far since players are yet to return to their desks from the holiday. However, sellers are pointing to soaring upstream costs, as well as, limited availability, especially for HIPS, as the main reasons behind their firm stance.

NYMEX crude oil futures reached a three month high settling above $97/barrel for October deliveries on Wednesday. Energy prices now indicate an increase of over $8/barrel since the month of August started. Triggered by the strong energy complex, spot upstream costs added to their gains during the week. In Asia, spot naphtha costs held mostly steady over the week on CFR Japan basis while they surged $90/ton overall in August. Spot benzene prices rose by $10/ton on FOB South Korea basis in a week, while the total increase amount reached $20/ton so far in August. Spot styrene offers edged up around $5/ton week over week with the same terms, while the latest values represented nearly a $30/ton increase from early August.

The prevailing local GPPS range is reported stable to $30/ton higher when compared to before the holiday, while HIPS offers are steady to $20/ton firmer, as per ChemOrbis. PS sellers agree on the fact that buying interest is visibly subdued after the holiday, but most keep their firm expectations for the near term given firm costs and hope to see an up-tick in activity starting from next week. “There are not many buyers calling to make price inquiries since many of them are still on holiday,” a trader said. Meanwhile, he added that his Indian supplier started to offer HIPS to Turkey again after a long time following maintenance at their production line.

A distributor stated, “The market is very quiet after the Eid Holiday in contrast to our previous expectations.” We believe that our prices are reasonable as we had heard even slightly higher levels prior to the holiday.”The seller continued to price GPPS in line with his high end offers before the holiday, while he raised his HIPS prices by $30/ton citing his very limited stocks. He further added that they can hardly predict the future trend as crude oil and spot styrene costs are rising but PS demand is not supportive.

“Demand is weak in the local market and we could sell only small amounts so far as players are not back from holiday yet. We don’t have prompt HIPS to offer for now. We lifted our GPPS prices after the holiday as our replacement costs are high,” another distributor commented.

Another distributor mentioned, “We couldn’t get any HIPS offers from our supplier as they will only be able to offer after mid-September due to their supply issues.” He repeated that the market is not as active as they had hoped it would be. “We still think that the market will remain firm in the short term, but we feel less optimistic for mid to end September as the market may slightly soften at that time,” he continued. “We purchased materials at higher levels after selling previous ones at lower prices and now with firmer costs, we are concerned that we may have difficulties to sell our materials at our higher prices,” he said. For HIPS, he confirmed that availability is still limited and he is offering some material that has just arrived to their warehouse.

Has the bottom neared in Asian PET markets?

Easy on resources and sustainable: Spunbond with REICOFIL technology is the better film.