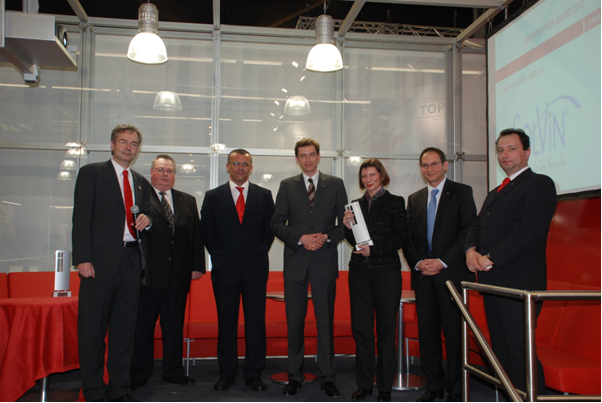 Leading the six awards at the ceremony, held during K2013, Spanish-based Molecor took the Gold prize for its larger PVC-O pipe measuring up to 630 mm in diameter. It opens a whole new market for corrosion free PVC pipes as it is 50% larger than previous versions. “The competitors and the winners of the SolVin Award show that the PVC industry is responding with innovative solutions to global megatrends, including the growing demand for water, energy and resource efficiency amid difficult economic times,” said SolVin Managing Director Filipe Constant. “They also demonstrate how our industry is meeting those needs in a safe and sustainable way.”

The SolVin Award jury included Andy Beevers, a British chemical engineer who manages digital magazines for the plastics industry. David Cook is Executive Ambassador for the NGO The Natural Step, working towards more sustainability. Kirsten Henson is a technical advisor for UNEP, the United Nations Environment Programme and lectures at Cambridge and Newcastle universities. Barbara Andreani manages the Brussels Enterprise Agency, “open innovation” between small companies and large organisations. Axel Enthoven runs Enthoven Associates Design Consultants, and teaches at the Academy of Industrial Design in Eindhoven (The Netherlands). He has won several prestigious prizes, including the Red Dot Award and the IF Design Award.

Upbeat gets into shape with Esterform packaging

Author plasticsinfomart 93
A new way to grow cells vital for nerve repair, developed by researchers from the University of Sheffield, could be a vital step for...
Read More

Author plasticsinfomart 126
A year ago, the microtechnology, nanotechnology, and advanced materials industry looked out on the year 2012 with quite positive expectations. As it turned out,...
Read More