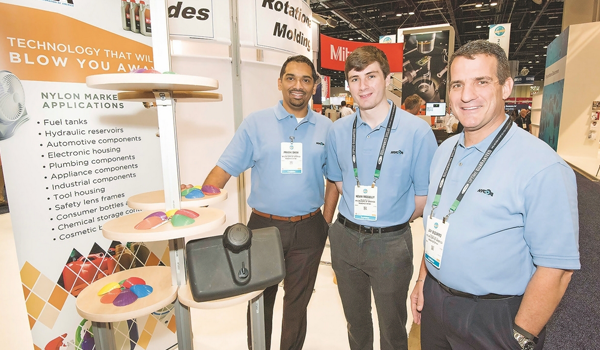 CUYAHOGA FALLS, Ohio–It’s appropriate that Dave Brassard included this quote from Arthur C. Clark, author of 2001: A Space Odyssey, as the tagline on one of his emails: “Any sufficiently advanced technology will always appear to be magic or impossible.”

That is what the silicone industry veteran and founder of Cuyahoga Falls-based Silicone Solutions Inc. appears to be running up against as one of his newest product developments–an additive mixture for use in the concrete industry–may appear to some to be too good to be true.

Brassard has been working on the project for about five years, using his background with silicone and silicon chemistry to develop CoolCure, a two-part admixture he claimed makes for a vastly improved concrete for use in mass pours. That is the type of product typically used in large, thick projects such as bridge supports, embankments, dams and foundries, where the width of the concrete is greater than roughly 3 feet, 10 inches.

Marketed under New Technology Solutions L.L.C.–a subsidiary of Silicone Solutions to handle unusual technologies he has developed for sale or licensing–CoolCure achieves something previously thought unthinkable for mass pour concrete, according to Brassard. It yields a concrete that stays much cooler than traditional Portland cement but also yields a much stronger product.

Industry insiders said that normally you can have one or the other: a cement that doesn’t heat up, but is weaker, or one that generates immense heat and is strong, but is susceptible to cracking.

Along this journey, Brassard has tested CoolCure successfully on dozens of occasions, made believers out of two concrete industry veterans, and even won an award for it earlier this year at the World of Concrete show as the Expert’s Choice for Best New Materials for Concrete Construction.

But what he hasn’t figured out yet is the best way to bring the product to market. And while making a successful development is one thing, gaining acceptance–particularly when you’re not an industry insider–can prove tricky indeed.

And the two concrete insiders he has been working with both cautioned that if CoolCure is not successful in its early real-world uses, the innovation’s future could be over before it begins.

Brassard said it’s not unusual for an outsider to look in and see things that those who have spent careers in the industry may easily overlook. He found that to be the case in the concrete industry, where he said there has been no significant advances in decades. That’s why he said it’s not surprising that the quality of the product is poor, with bridges and other major concrete structures falling apart, some barely lasting two decades.

He first became involved in studying the problems with concrete when someone approached him and asked if it was possible to make concrete fireproof. Brassard said, “Sure,” and he also said he proved that it could be produced so it doesn’t generate extreme heat.

As a chemist specializing in silicone, he noted that silicon and silica are key ingredients of concrete. He studied the chemical reaction and found it to be quite inefficient. He said the more efficient a process is, the less byproducts there are, and that all the current problems with cement were related to the byproducts that were generated.

The bottom line, Brassard said, is that he added nano silica and a catalyst, bringing about full conversion of the calcium. With no calcium hydroxide generated, there was no heat. And without heat, there was no cracking.

“It’s all based on silicon- and silicone-type technology,” Brassard said. “That’s why I had the insights. And as an outsider, I could look in and see this, whereas people in the industry have all these paradigms they have to follow. As an outsider I had no preconceived notions, and I was able to look at it from outside of the box.”

About 20 percent of the mass pours, he claimed, are rejected because of excessive heat. There are certain heat limits contractors are supposed to stay within, but they are not able to address heat properly using current technology. Thus, there are tens of billions of dollars spent annually to cool concrete, using such methods as inserting cooling coils in dams and bridge foundations, or pumping coolant in to try to pull the heat out.

“What I’ve done is fix the chemistry so it doesn’t get hot,” Brassard said. “We break all the rules all the time. We customize things for people everyday, so it isn’t too far-fetched for a little company like us to do something like this. In a large corporation it would take years.”

The literature for the patent-pending CoolCure product has a laundry list of product features, typical applications and ways it should aid those using it. But as someone who admittedly knew nothing about the concrete industry when he started, he knew he would need help in moving the new technology forward.

Over the past five years CoolCure has had at least 40 demonstrations, always passing with flying colors, he said. At first, he had a business partner, but it was someone who wanted to bias the results, and being a technical person, Brassard couldn’t deal with that.

The next step was to look for affirmation from within the concrete industry.

Tom Luby is manager of Northeast U.S. sales for Flir Systems Inc.’s IntelliRock software products line, which use a microprocessor-based chip that goes inside the concrete to measure the temperature and strength. When he heard the claims about CoolCure, he was skeptical, to put it mildly.

“I thought I would go out and instrument it, and it will be pretty clear to them that it doesn’t work,” Luby said. “I’ve been doing this for 15 years now. I thought it would be a pretty easy thing to show them the data and it wasn’t going to do what it says it does. What they were claiming was really impossible in the way the thought process works with mass concrete and thermal control. When you put a lot of mass together, it gets hot.”

But after putting in his firm’s instruments, much to his surprise it worked. The temperature was much lower. Luby said he got engaged, and ran several more tests. Each time it got lower temperature and higher strength, the two things that don’t go together.

Normally, contractors have to mix in portions of slag or fly ash with the Portland cement to try to minimize the heat. While that deals with the thermal side of the equation, it typically yields a weaker material.

Luby then conducted about 30 tests at different facilities, varying up the manufacturers, the Portland cements and the aggregates. “Always two things hold true,” he said. “It’s going to create much less heat and it’s going to yield higher strength.”

If it can find acceptance, that would be remarkable, he said, because of the amount of effort and expense contractors spend to try to manage the thermal activity. Current solutions involve trying to cool the concrete but doesn’t solve the problem of the heat being generated in the first place.

Many contractors end up paying large penalties because they can’t keep the concrete below the specified temperature. Even worse, he said there are new bridges that are going to have thermal cracks in them because the heat generation wasn’t properly controlled.

Luby said he believes it was good Brassard looked at the problem from a polymer perspective, because that gave him a different thought process. “I don’t think the approach to get to this solution is in anybody’s wheel house because it just is so much different than the conventional wisdom of the mass concrete industry,” Luby said.

Jim Fichtelman of Shelly Ready Mix in Ohio has more than 40 years in the concrete industry, and he also didn’t expect Brassard’s technology to work. Fichtelman had heard plenty of claims over the years where someone said “this is the best thing since….,” but it never was.

But after testing CoolCure several times he became a believer. And what impressed him the most was that Brassard could adjust the chemical additive to hit whatever target temperature was desired. That excited the veteran because as a concrete guy, he said he had to continually adjust powders to make the mixture work, knowing which would affect temperature and which would adjust strength.

Bringing it to market

Brassard believes he’s gaining ground, pointing to the award at the World of Concrete as one indication. “That means they’re starting to accept it and understand it,” he said. “That’s a very positive development. When the ‘experts’ get it, you’re just a hop, skip and a jump away from folks starting to utilize it.”

His hope is that within a year the technology will be highly discussed and begin to see use, and within five years move toward being standard within the industry.

He said he learned long ago that the best way to get people to change is to take a problem they have and solve it. “Everyone needs motivation,” Brassard said. “Few people want to take chances or do anything different, but when they’re up against the wall–like the people with the concrete with the heat–they’re in trouble. That’s when they’ll make a change. We’re right on the cusp of it now.”

For now, the team is continuing with mass pours and demonstrations. A couple of engineering firms are interested, along with a firm back-integrated into silica. Brassard is open to either licensing the technology or selling it outright, and said he will even produce it himself if it comes to that.

Luby, for one, said he is counseling Brassard not to jump in and produce it himself. He said there are many large projects his firm is involved that could benefit from the CoolCure technology, but it must be utilized properly. If someone just buys the additive but doesn’t follow procedures, it could end poorly and give the product a bad name before it ever gets going.

“I think it’s far easier to build on positive momentum than it is to get out there and let one project go south and get a bad reputation, albeit not fully warranted,” Luby said. “I’ve been trying to keep (Brassard) to get the right partner that’s in the industry, and has the equipment and systems in place to make sure it’s utilized in the most optimal way. And if they do, it’s going to work every time.”

Fichtelman said there are two major issues. First, nobody wants to be first. And second, if they are willing to be first, they want to know what’s in it for them.

He said he can kind of understand it, because there is a huge liability with such projects, and CoolCure doesn’t have the track record to be able to give the type of guarantee customers are seeking.

The bottom line, Fichtelman said, is money. The chemical doesn’t have much impact on the price of the concrete–it’s basically a wash–but can have a greater impact on the amount of money contractors are spending to control heat. Those costs can run six figures on certain projects.

“I told Dave, ‘Don’t give up. We’re going to find it,’ ” Fichtelman said. “Maybe it’s not this project, but maybe it’s going to be the next. That’s the long and the short of it. But we’ve got to find that first job and, when we do, it’s got to work.”