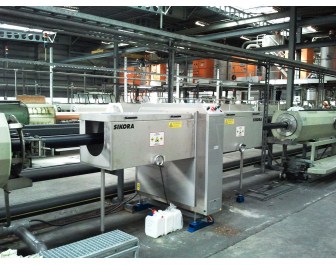 After extensive discussions and development work over a three year period, Sikora has recently commissioned the X-ray device X-RAY 6300 at DYKA, a gas and water tube producer in Overpelt, Belgium.

“At the beginning of our cooperation, DYKA desired to reliably measure single-layer PE tubes during production. By pursuing this goal with Sikora the basic concept for a continuous quality control at the extrusion of plastic tubes was developed. In 2011, the first X-RAY 6000 device was presented to DYKA. Knut Szemjonneck, Sales Director Hose and Tube, remembers, “Previously DYKA had tried alternative measuring procedures within the factory, but they were found to show weaknesses and were rejected. But our device demonstration quickly convinced them of the advantages and the reliability of the device.”

DYKA’s extrusion line produced natural gas tubes made of PE with an outer diameter of 250mm and a wall thickness of 25mm at a line speed of 6m/min. For the large diameters that are typical for gas or water tubes the online quality control is important for minimizing costs. Due to the large diameter of the product Sikora’s X-ray device X-RAY 6300 was chosen since it covers a diameter range from 30-270mm. It was installed between the first vacuum tank and the spray bath. The function of the X-RAY 6300 in this position is to continuously control the quality of PE tubes both quickly and precisely during the production process, the company explains.

After switching on the device all measuring results such as wall thickness, outer and inner diameter, eccentricity, and ovality are immediately available. All data are presented numerically and graphically on the processor display system ECOCONTROL which has simple operation via an intuitive touchscreen. ECOCONTROL provides a clear overview with a graphical line representation of positioning of all measuring devices to the user and utilizing the special control module SET POINT, DYKA can additionally control the diameter or wall thickness to nominal value continuously by automatically influencing either line speed or extruder rpm. Hence, the X-RAY 6300 fulfills all requirements for process stability and permanent quality control.

Author plasticsinfomart 144
Visiting the dump may not be high on your list of priorities this weekend, but maybe it should be. That’s because this Saturday will...
Read More

Elections go ahead in Ludlow and south Shropshire but should it be delayed to autumn?