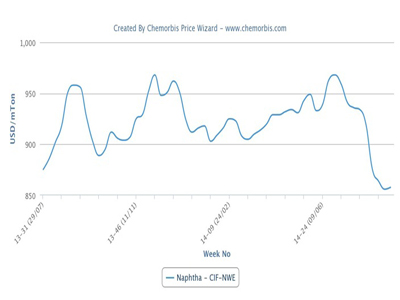 In Europe, late August deals for PP are being concluded with decreases while trading activities are muted as players are returning from the holidays in South Europe while others are focused on the September outlook as per the pricing service of ChemOrbis.

A West European producer settled their August gentlemen’s agreements for PP with decreases of €20/ton after approaching the market with rollovers. A producer source commented, “Demand was calm due to the holidays in South Europe. Regarding the awaited September propylene settlements, we heard about decreases of €40/ton based on lower naphtha costs.”Another West European producer also concluded some spot deals with discounts of €20/ton for August. A producer source commented that they expect to see further softening for September while adding that they are not sure about the decrease amount.

In Italy, most distributors reported conceding to discounts of €20/ton on their August PP deals in the spot market. The sellers reported hearing about decreases from €30/ton to €50/ton for the September propylene settlements in line with lower spot naphtha costs.

Spot naphtha prices on a CIF NWE basis have declined by around $35/ton since the beginning of August to move below the $900/ton threshold at the end of last week, the lowest level in a year.

Converters in Italy remain cautious about their purchases after returning from the holidays this week. A container manufacturer reported settling his August contracts €20/ton below July. The buyer reported buying only limited volumes as he is planning to observe his end product orders following the holidays. Another converter also obtained discounts of €20/ton on his August deals while adding that he isn’t planning to make further purchases until the second week of September. A compounder added, “We only bought small volumes of homo-PP this month as we expect to see further softening in September.”

In Belgium, a distributor concluded some late August deals with discounts of €20/ton after obtaining rollovers in a few cases at the beginning of the month. “Supply is not ample while we expect both propylene and PP prices to decline in September given weaker spot naphtha,” he commented. Another distributor also concluded most of his August business with decreases of €20/ton while conceding to larger discounts of €40/ton in a few cases. According to the seller, sluggish demand is in balance with short supply and propylene contracts are likely to settle lower for September.

According to ChemOrbis, a converter in Germany reported, “Our suppliers issued decreases of €20/ton for their August contracts, but we gave counter bids with larger discounts of €30-40/ton. Our end product demand is normal.”

A world first: Ceresana Analyzes the Global Market for Xylene

Author plasticsinfomart 74
Oil rebounded back above $53 a barrel on Thursday, after falling more than a dollar in the previous session on bearish U.S. oil inventory...
Read More